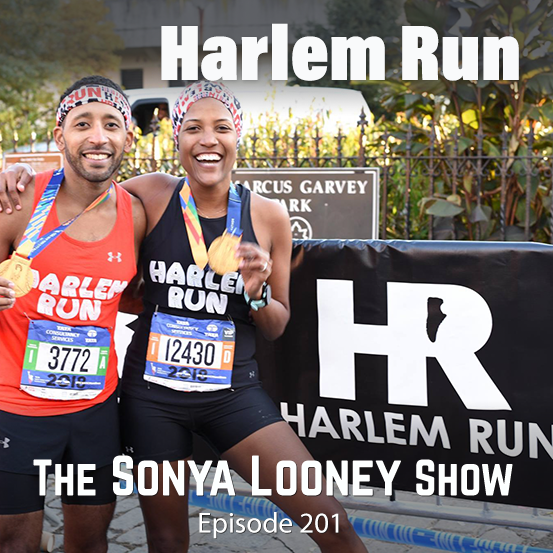 By Sonya LooneyJune 25, 2020July 8th, 2022No Comments
Alison Desir and Amir Figueroa are on a mission for social change.  The two individually found their love of running – Amir’s father died of HIV when Amir was 4 and Alison was struggling with depression and some very hard life challenges with a bad break-up and a very sick father.  And from there, they found running through seeing others lead by example.  Amir saw a friend with HIV walk a marathon and raise money for Harlem United.  Alison saw a friend on social media who was a black man training for a marathon and felt empowered to do it too. And now?  Leading by their own examples is changing the world.  Before they met, Amir and Alison started their own running groups to build community in Harlem and met because of similar hashtag they were using.  They decided to join forces. Not only did they join forces, but they got married and had a beautiful baby boy named Kouri about a year ago.  For Alison and Amir, it’s not just about running, it’s not just about having a club.  It’s about running for social change to create diversity and leadership in communities.  Walkers, joggers, and runners of all ages and abilities show up for Harlem Run evenings.  I got to speak with Amir and Alison individually.  Amir is a Boston Marathon x, ultra runner, and senior researcher at Colombia University. Amir and I chatted about his new foray into fatherhood and what that means to him since he lost his father at a young age.  We talked about running with purpose, the power of vulnerability and good communication, and how the grit and life lessons from ultra running can empower us in daily life, especially with all the challenges in 2020.  We also talked about COVID and his research at Colombia University. Alison Desir was named by Women’s Running as one of twenty women who are changing the sport of running.  Her father nicknamed her Powdered Feet to describe her as someone so active that you never see them.  She is doing so many impactful projects and is a strong voice for women’s rights and people of color. She also has not one, but two master’s degrees.  We talked about the importance of being a voice for others, how Harlem Run continues to be an inclusive group that attracts all different types of walkers, runners, jogger, and people from differing backgrounds, a few of her incredible advocacy projects, the topic of gender constructs with raising children, running as a vehicle for social change and so much more.