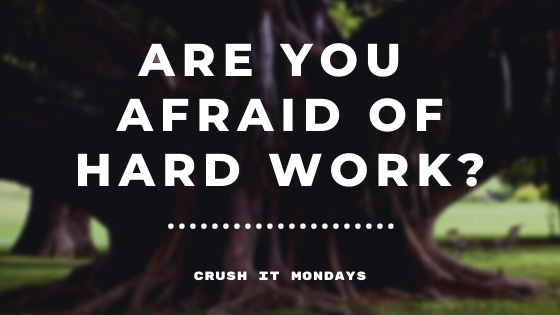 Are You Afraid of Hard Work? | Crush It Mondays 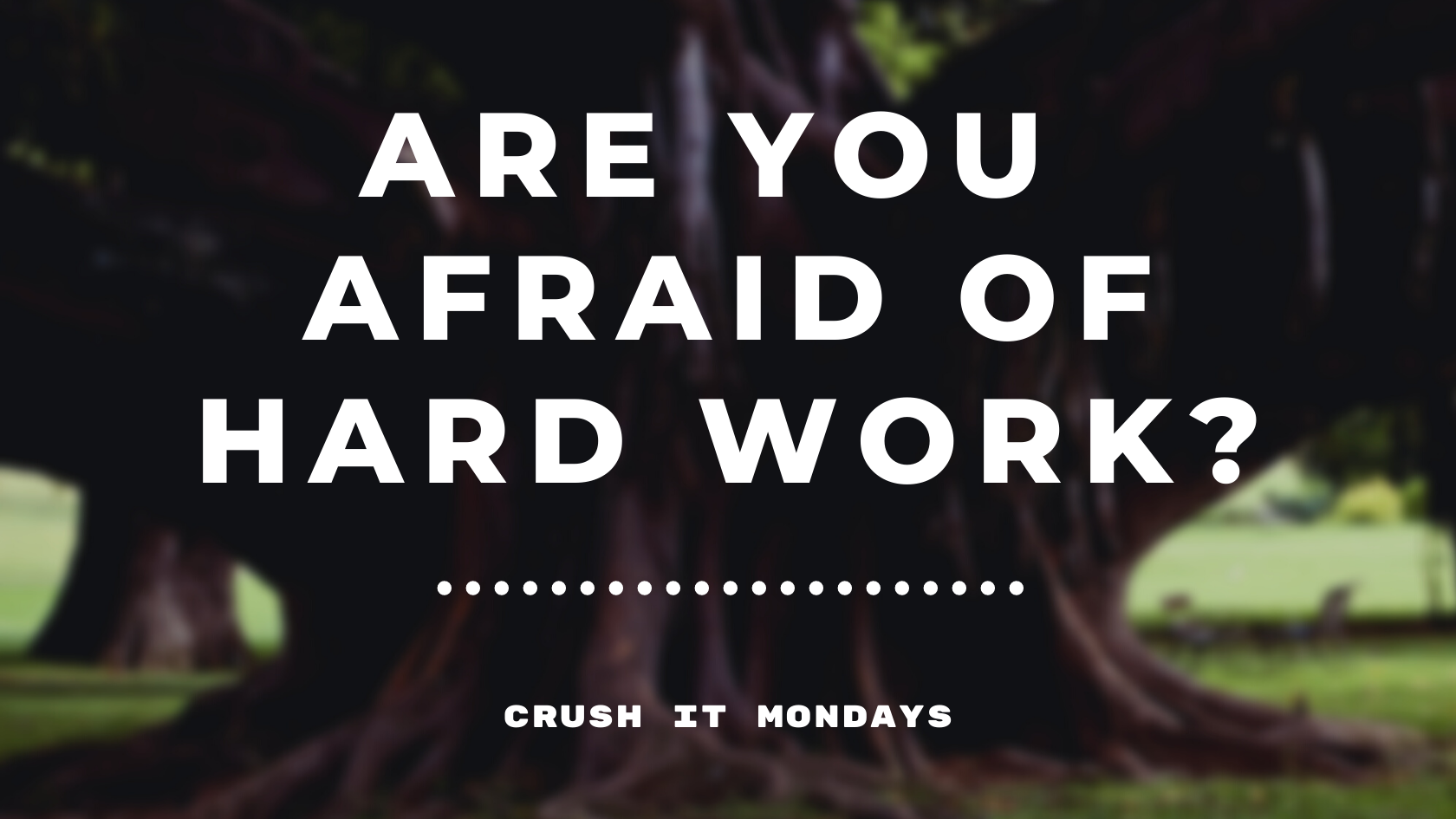 Today’s topic is an interesting one and I want to talk about it just to inspire some thought around how we talk about hard work. It’s more than just a phrase or topic of conversation that is thrown around, but I don’t think many people even realize they are saying it.

This phrase is haphazardly thrown around in our regular conversations, so much so that I’m not even sure we realize we are doing it. The fact is that saying something is a lot of work is often used as a negative caveat. If you’re talking about a good experience to someone and then throw in, “but it’s a lot of work,” the person you’re talking to might feel discouraged or might not even want to try what you are doing. “It’s a lot of work” is also an excuse people use to create a barrier to getting started.

Here are some examples I’ve heard recently about the phrase “it’s a lot of work” either being used as an excuse or just in regular conversation that can inadvertently come across as negative.

“Cooking a plant-based meal? Or even cooking a meal at home?  It’s a lot of work.”

“Babies are a lot of work, but they are fun too.”

“Training for a mountain bike race sounds like too much work.”

“Starting a side project would be cool, but it would also be a lot of work.”

And here’s one I’m guilty of saying we people ask me about podcasting:

“I love podcasting, but it’s a lot more work than you’d think!”

I’m not saying it’s bad to tell someone that a task is a lot of work, but I think it’s important to be aware of the context. Also, why do we feel the need to emphasize that something is a lot work?  Most of the time, we have the best intentions. We want someone to know that if they want to take on a new commitment, we want to prepare them by letting them know there will be some time and effort involved.  Most of the time, we are not trying to discourage someone but it can inadvertently come off that way- or worse, you can sound like you are complaining.  Saying something is great but then adding “but it’s a lot of work” can take away from how great it sounds.

And when we use “it’s a lot of work” as an excuse to avoid getting started- well that’s a whole other story.

My comment is: why is something being hard work a bad thing? Why are we so afraid of the idea of hard work?

I’ve broken it down into a few sections. The first is one I’ll lightly touch on, but won’t go in-depth because the topic is very broad and is even something we’ve spent hours talking about on the show with guests: topics like the brain’s quest for dopamine, building good habits, setting goals, sticking to commitments. There are tons of articles on why we are lazy, how not to be lazy, etc.  I’m not going to go into laziness.

First, let’s have a mindset shift around “hard work”

Matt and I were talking about this topic as I was writing this post. I was telling him that I actually enjoy working hard. I don’t mind investing my time and energy into things. An example: when we decided to get a puppy, everyone told us that getting a dog was going to be a ton of work.  It doesn’t feel like work to me, it just feels like a fun addition to my life that takes attention I want to give. When I start and commit to projects or to races, I know I’ll have to put in a lot of work and effort, but that excites me.

My question is: what else would you rather be doing with your time rather than committing it to “working hard” for something you care about? The idea of endlessly relaxing may sound good, but in truth, I would find that horribly boring and unsatisfying. I want to spend my time doing things that make me think, take my attention, and really challenge me.  Something being a lot of work is simply not an excusable reason. If it’s not a lot of work, it’s probably not worth my time!

We should start equating hard work with an awesome opportunity to get better, to learning new things, to growth, to forward momentum, to focused time and energy that makes us feel more purposeful.

That’s how I view hard work. So when someone says, “wellll, you could do x but it’s a lot of work…” the “it’s a lot of work” does not intimidate me at all. The things that mean the most to us in life are things where we have put in hard work and maybe even struggled.  I don’t want an easy, boring life.  I want to work hard. I love to work hard. In some ways, it’s human nature to look for shortcuts, to look for ways to expend less energy, or find the easy way out.  In some cases, it makes sense. But from an identity standpoint, I don’t want to self-identify as someone who takes the easy way out or who is lazy or who is afraid to do something because it’ll take effort.

If you can figure out why hard work is causing you resistance, you can get down to the deeper reason you are experiencing resistance. The majority of issues are that we are either too focused on the outcome being the only thing that matters or we are too worried about what other people will think of us.

How can you get more excited about hard work?

First, consider what I mentioned before that everything you’re most proud of probably took a lot of effort. Second, the work is the point. A lot of times we just want the outcome, but we are not entitled to the outcome- we are only entitled to the work itself. If you love doing something for the sake of doing the work itself, then you aren’t worried about how long or hard it’ll be to try to get to your end goal.

The outcome isn’t the only thing that matters

Enjoy the process. Often we think we don’t have enough motivation or willpower, but it’s our attitude or impression of how it feels to work hard.

It’s not willpower, it’s not lack of motivation, it’s your attitude toward hard work.  It’s also about just getting started. Here are some of my tips on how to have more follow-through on your commitments.