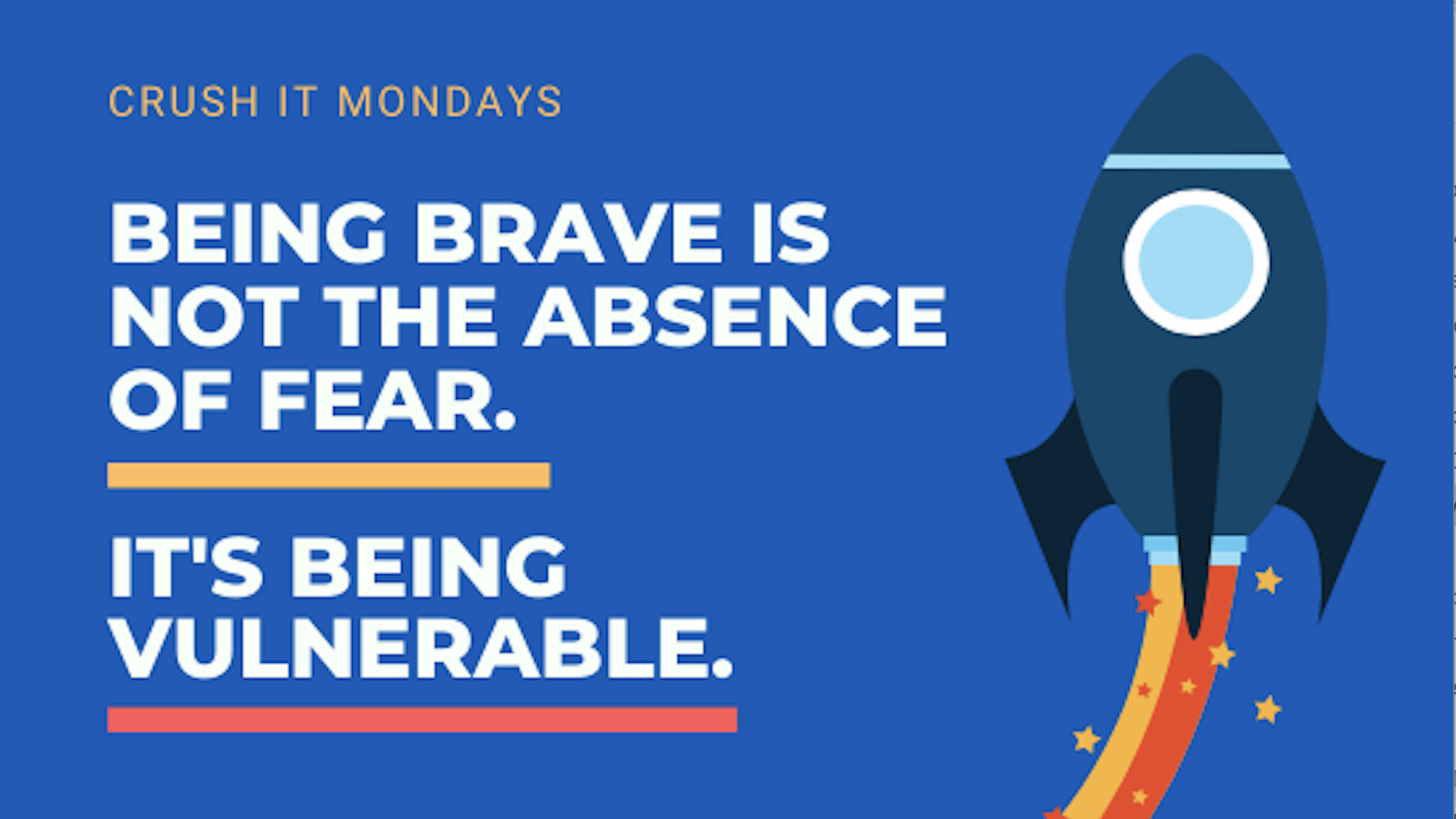 Being Brave is Not the Absence of Fear: It’s The Courage to be Vulnerable 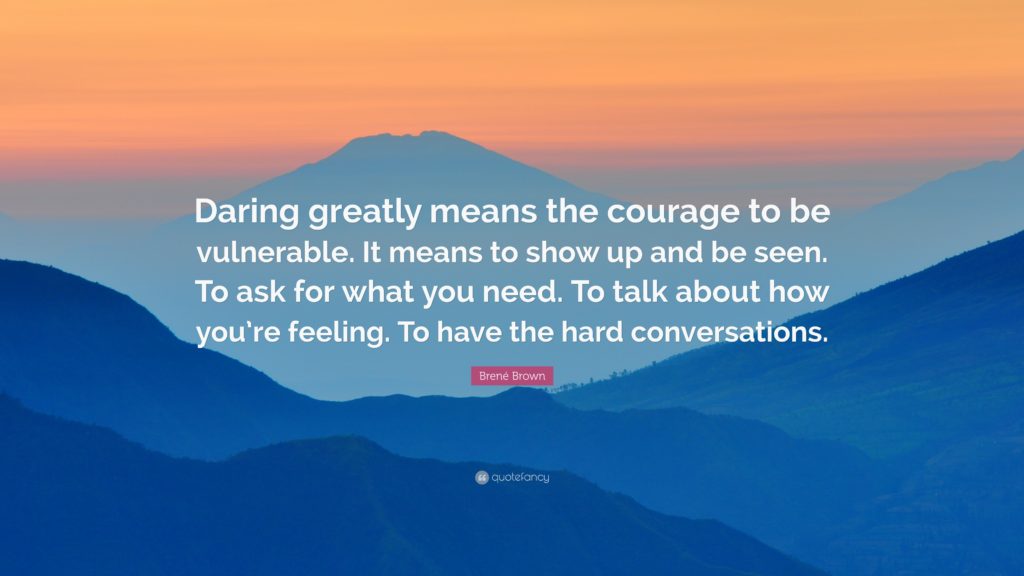 Being brave is not about the absence of fear, it’s about having the courage to be vulnerable – to press on in spite of fear. The first memories I have of someone using the word brave is when I was a little kid.  For most, it usually has something to do with having to get a shot at the doctor or getting an injury of some kind and then an adult telling us to be brave.  In cartoons, the hero or heroine is often characterized as someone who is brave- someone who will go into battle knowing that the consequences could be dire.  But I’ve seen portraits of bravery show up as someone who appears stoic and doesn’t show vulnerability or cry.  This is where I think the definition of bravery starts to diverge from what it actually means.

One of my favorite taglines I made up for my own life is “Be Brave. Do Epic Shit.”  I have put a lot of thought into what it means to me to be brave.  To be honest, trying to avoid feeling and showing difficult emotions has been one of the harder parts of bravery for me.  Bravery means actually letting yourself feel those emotions without letting them defeat you or change your path.  This discussion could get complicated really quickly if we bring in things like masculinity.  Men, especially the older generation feel pressure not to show or feel vulnerable emotions. Perhaps my view of bravery initially came from men.  I remember even from a young age wanting to be viewed as masculine instead of feminine because I used to think masculinity was akin to strength and bravery.  Oh how wrong I was about that! It’s a complex topic for another Crush It Monday.  Continuing with my digression for another moment, I still hate comments about women being emotional, or “crying like a woman.”  I AM a woman and I struggle with some of my emotions. I can only imagine what it must feel like for some men.  I think this is an important discussion, but I need to move on to what I think it means to be brave.

First, try to think of the first time in your life when either someone told you to be brave or you realized you did something that made you brave.  This is what Matt’s story was: he was in grade 9 wanting to take Japanese, but Japanese was with all the upperclassmen that he looked up to. He had to get up in front of the class and say something in Japanese and was afraid he would look stupid, but he realized he had a choice and did it anyway.  Matt felt uncomfortable and did it anyway. 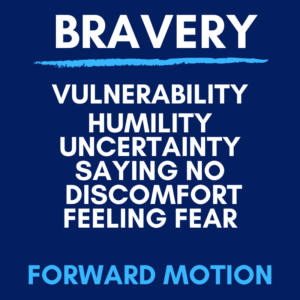 What are some elements of bravery tucked under the overarching theme of a “willingness to be vulnerable”?

If you go to the dictionary, bravery and courage go hand in hand.  Being brave is “to have courage” and courage is “the ability to do something that frightens one” or “strength in the face of pain or grief.”

Being Brave is Not the Absence of Fear

It’s feeling the fear and doing it anyway.  It’s doing it in spite of the fear. Now this doesn’t mean doing something irrational like saying “I’m brave” and then walking out into traffic.  It’s not saying “I’m brave” and putting yourself needlessly into a dangerous situation.  A whole other topic of discussion would be where is the line between bravery and dangerous risk?  How can you be more brave and do something you’re afraid of?  Personally, it’s been considering my outcomes and asking myself what the worst-case scenario would be.  Minor injury?  Embarrassment or shame if I fail? Wasted time? Simply not being able to do it?” Often the fear of the thing preventing us from being brave is way worse than if it actually were to happen in real life. Simply considering what the worst case will be might help you overcome your fear.  Another thing is that when you feel some fear and are moving forward anyway, it’s paying attention to how your body feels.  Does it feel tight?  Breathing long slow breaths can help too.

Being Brave is Not Burying Your Emotions, It’s Sitting With Them

I’ll say it- I hate it when I cry. It doesn’t feel good to me and it makes me feel weak.  Posting a video of myself crying and then later using it in my TED Talk was one of the scariest things I’ve ever done.  I still cringe when I know thousands and people have watched it. This is a really negative and untrue view of crying, layered with all kinds of baggage and unfair judgements.  It takes courage to sit with discomfort- whether it be emotional or physical and sometimes and emotion is both.  Burying and denying emotions because they hurt does not make you stronger and it’s actually unhealthy.  Over the last few years, I’ve worked on letting myself feel some of those emotions I would hide from.  I would hide from anger by going and exercising really hard. I think that it is healthy to blow off some steam, but there are times you can’t just go exercise when you’re angry.  I think learning to say to yourself  “I feel angry” or “I feel really said right now” and then “and it’s okay” is a powerful exercise. As endurance athletes, we are used to sitting with physical discomfort for hours but emotional discomfort?  No, that can be so much harder! Call it self-compassion, call it being brave with your emotions, or even call it mindfulness.  The space between the emotion rising and then recognizing what it is before you react is a good first step (maybe you lash out or maybe you bury it).  Learning to sit with it and that it’ll pass is another thing.

Being Brave Means Setting Boundaries and Having Humility

Sometimes being brave means speaking up for yourself and putting yourself first.  That includes examples like saying no to others and setting boundaries or saying no to yourself if you’re engaging in critical self-talk or patterns of overplanning that lead to burnout.  It can even mean turning around and going home to rest if you’re feeling tired and overtrained on your bike.  It takes courage and confidence to say no, to do less when you’re tired, or even to rest if it feels like you’re falling behind.  Being brave can also mean standing up for yourself or for others. Being brave means being willing to love deeper which is inherently risky because you can suffer emotional pain if it doesn’t work out.

I’ve had to learn new situations of bravery in my pregnancy which has had a lot of uncertainty and lack of control. Simply moving forward in my cycling career has been an act of bravery, of putting myself out there, of accepting really disappointing rejections because of other people’s biases of what I will be capable of in the future as a professional athlete mom of an infant.  There are days I’ve wanted to give up and felt like my idea of the future was impossible because other people didn’t believe in me, but I kept moving forward and I will continue to do so.  Uncertainty and fear can be the same thing, but being brave means showing up, choosing to keep trying in the darker moments when you don’t know what it’s going to look like, when it feels like everyone is against you or doesn’t understand you.

As Brene Brown would say “Courage equals vulnerability” and I couldn’t agree more.