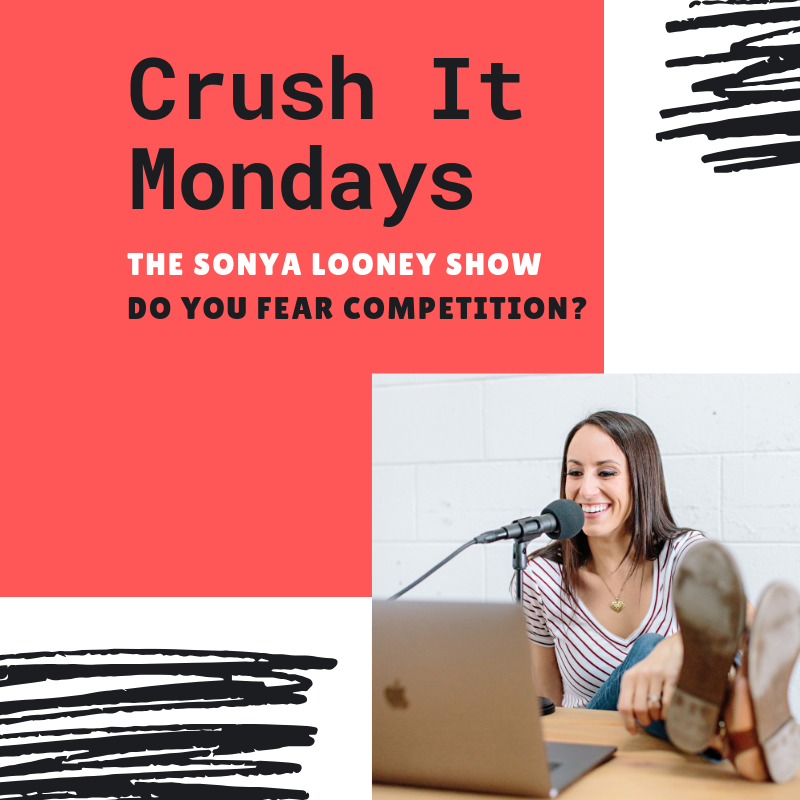 Crush it Mondays: Do You Fear Competition?

By Sonya LooneySeptember 9, 2019No Comments

This is an episode of Crush It Mondays.  Each week, I’ll bring to you an inspiring message, habit, or contemplation to get your week off to a powerful start.  In this week’s episode, I want to talk about the meaning of competition.

It’s normal to be intimidated by competition or your competitors.   Competition is a measuring stick for comparison on a given day.  Competition has many contexts; athletic, business, contests to inspire action, and even simply just competition for attention.  Competition and comparison can be positive, but it can also be a slippery slope because while it can have positive benefits, it can also harm your confidence and cause anxiety without the right outlook.  I’ll use athletic competition as an example in this podcast because it’s what we are most familiar with.

All of us who have ever worn a timing chip, a number plate, or had our name on a team roster have felt the exhilaration, nerves, excitement, and even anxiety about our performance.  We look at start lists to see who else is there, we compare our preparation to others.  It’s normal to have that tense feeling.  Even after racing for 15 years, I get both nervous and excited on race day.  Sometimes, I will even admit to dreading race day and wondering why I put myself in a situation to feel so uncomfortable.  That’s how I can tell I’m super nervous about it.  Have you ever asked yourself why you are nervous?

Personally, and I’m sure some of you can relate as well, it’s because I’m afraid of several factors.  One, I’m afraid I’ll look stupid if I don’t perform well relative to my competitors. I worry I won’t have good legs that day. I worry I won’t be good enough and what will other people think?  What will I think if I put in all this work, made sacrifices and I don’t meet my expectations?  Some people’s most daunting expectations are their own while other’s are more nervous about external expectations.  Competition also has an extrinsic motivation component to it.  When you compete, you can “win” something. You win recognition, a prize, money, or a trophy. You could even win the respect of fellow competitors which is something we all want. Extrinsic motivation is tied to an external reward.  I think it’s very important to look for your intrinsic motivation.  I think it’s the key to longevity in a competitive environment because if you can tie your success, or feeling proud of your effort to something that is less about comparison and more about a different purpose in which you have more control, it can help relieve the pressure of needing to achieve a certain time or a certain place.  I think we do need to be ranked by our race time or a game score compared to others or it wouldn’t be a competition, but if you make your goal to perform your best on the day, be consistent in your preparation, work on having a positive attitude even when it gets hard, or nail a technical section, it can broaden the measurables of what success meant to you on the day apart from just your race result.

Now what if you fear the actual people or the competitors?  It’s something I’ve been working on for years, but I try to look at my competitors not as my enemies, but as people who will make me better too. I’ve seen peoples’ names on a start lists and been intimidated thinking I’ll never be able to beat them, but that’s a self-limiting belief.  I’ve proven myself wrong.  It doesn’t help to stare at start lists and guess what the outcome may be.  It’s better to focus on your own strategy that plays to your strengths.  It’s good when there are lots of strong people on the start list, not bad.  Some of my proudest performances haven’t necessarily been from winning, but they’ve been circumstances where I raced my bike better than I ever thought I could, and that was a win to me. Without strong people around me, I wouldn’t have risen to another level.  It can be hard to remember this sometimes, especially when you don’t come out on top or maybe you had some unfortunate bad luck.  Winning feels amazing and there’s something very special about it, but no one wins every time.  That’s what makes it special.

So can you be happy and inspired by people who are better than you? Can you have gratitude that you are better because of them?  Can you recognize that you work harder and are motivated because of them when you’re training? Someone beating you does not make you a lesser person and sometimes we feel like a less loveable person if we get beat or maybe we feel like we let someone down.

I really enjoyed watching the Mountain Bike XCO Finals over the weekend. If you haven’t watched it, this is your spoiler alert to turn off the podcast.  I loved how Kate Courtney, Jolanda Neff, and Nino Schurter all said that having a very high level of competition made them better this year.  Congrats to Kate Courtney for being the first American woman in 17 years to win the overall world cup title!  Jolanda Neff was second and she said that having the overall standings be so close made her better.  My husband Matt also talks about how he loves it when his friends beat him and he is happy for them.  I think it takes work and a certain level of maturity as an athlete to get to the point where you can truly be happy and thankful for your competition, but getting there starts with asking yourself all the questions I just talked about.

The last point I want to make is going back Carol Dweck’s growth vs fixed mindset which has been a common theme in this podcast and in my life since I first read her book titled Mindset.  Real quick if you haven’t heard of it- a growth mindset is believing you can always improve at anything and a result is not a confirmation of being good enough or not being good enough.  A fixed mindset believes you have a set amount of talent and if you don’t win or do well at something, it’s just proof that you aren’t a fast athlete or intelligent (if it’s a test).  Applying this concept to competition and fear of results, not winning or not getting a certain result isn’t proof you aren’t good enough.  It’s proof that you can work harder to get better.   And winning doesn’t last forever either – you also have to keep working hard. It’s about the work, it’s about the effort, and it’s about the person you become while working towards something that matters most.

Give Back to the Show