Ah, the Front Range 50… the first race in Colorado for me this year. It’s good to be racing in my home state once again, and racing in Colorado means one thing, tighten your shoe buckles and bring your A game because lining up for a race in Colorado is different than most other places. There are so many fast, national and world class athletes in this area that it makes my mind spin sometimes!! I always wanted to move to Colorado because I knew it’d make me a better athlete, and it continues to be a benefit! Living here not only wants me to boost my level as a cyclist, but in everything else I do. It’s kind of funny, I sometimes feel like I’m a dime a dozen in Boulder whereas almost anywhere else, what I do would be considered “special.” But that’s another post! The Boulder Bubble…ahhh yes.

Lining up for the Front Range 50 was no exception when I talk about the caliber of athletes. I was lining up among some of the best endurance racers in the country for a ripping fast 5 lap, 50 mile race. I actually wasn’t nervous and for once, wasn’t quite sure what my expectation was. I was definitely still a little sore from my run a few days ago and lined up thinking, “oh well, let’s have some fun and HSB!” We had to line up behind ALL the men… all categories, all ages. We were definitely grumbling in light of the fact that passing on this course takes a great deal of energy. 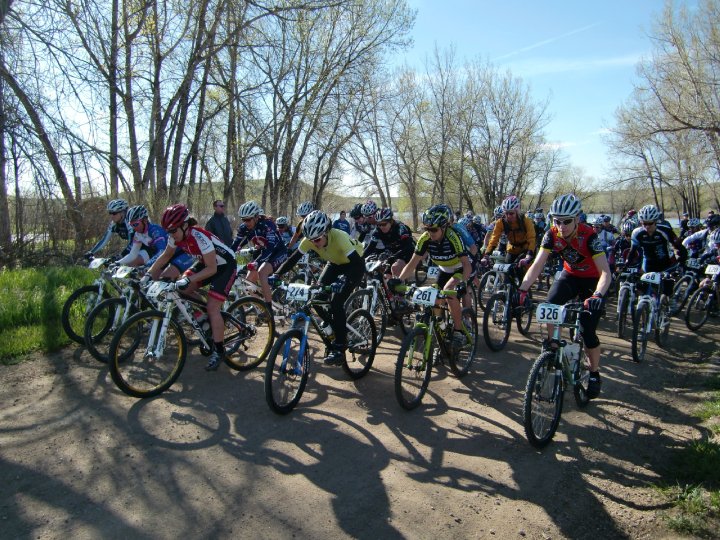 At “GO!”, Amanda Carey and I were instantly chomping at the bit. I was leading the pack up the dirt road, and decided I didn’t want to be first for some reason and Amanda quickly came around me.

Amanda entered the singletrack first with myself right behind. I didn’t look back to see all the fast women charging behind me, and I dared not look down at my Suunto T6 heart rate monitor, which was saying, “ummm…you should probably back off.” Within 2 minutes, we had already caught the back of the men’s race and the fun began. When Amanda passed, I made sure to pass at the same time. Letting a guy or two get in between us would open a huge gap as I would learn! We took turns riding in 1st and 2nd on that lap, and basically taking turns initiating passing all the guys. Note – I’m sorry guys, I hope I wasn’t rude trying to get around, but we were the race leaders! The traffic on the course was absolutely insane.

Lap 2 – “Whoa! I’m still riding in 1st and 2nd! I wonder if/when those other wicked fast girls behind will pass me.”

Amanda got away from me for awhile on lap 2. I got gapped off when I failed to pass another guy with her and ended up catching back on at the end of the lap. We were definitely in a pissing match the first 2 laps of the race, something I normally don’t do, but I wanted to see how my body would respond to pushing this hard in a 50 mile race. I ended up moving into first at the end of the lap, but she overtook me again.

Amanda and I started lap 3 together, but she ended up dropping me again. I was caught by Kelly Boniface which was certainly not a surprise considering she is normally on the podium at both XC AND endurance races. She’s so badass! Soon after, I was caught by Kelly Cullen who took last year off of racing to become a mommy, but in 2007, she completely stomped the endurance scene. At some point, I passed Kelly C again moving back into 3rd, but she passed me back later. I noticed that they both also overtook Amanda. I think we were both blown, and had wasted a great deal of precious energy trying to get through all the traffic on the course. I had nothing, and I knew it. My heart rate dropped 20-25 beats and the nasty burning fatigue monster had set in. I wasn’t surprised because I was curious to see how long it would take me riding in the red for this to happen. I did what I knew how to do. Pedal. I knew my legs would come back if I backed it off and I rode that lap about 5 minutes slower. Not honorable, but I’m sure glad I didn’t get caught by anyone else. I was hoping the blazing fast start would be enough, but I was definitely waiting for Eszter to pass me like a bat out of hell! I focused on eating, drinking, and actually breathing. All the yoga I’ve been doing actually helped me mentally accept where I was, to be present in the moment and not worry about the fact that I had 25 miles left to go and I felt like hell. 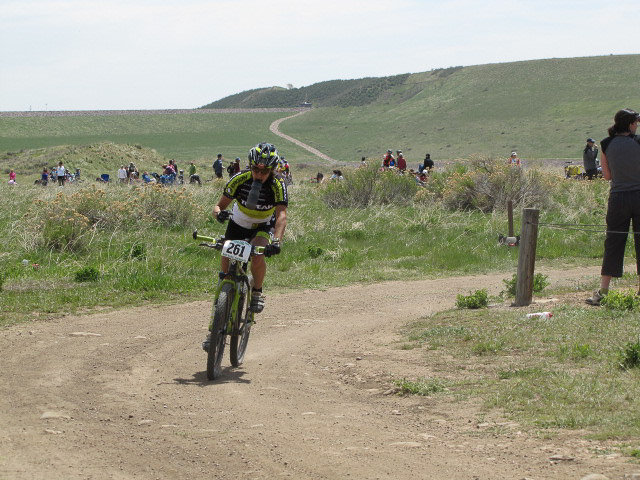 Lap 4 – “Please, please, please work, legs!”
I started to get my pace back but I was still sitting in 4th place. 20 miles left. I had an argument with myself during this lap which will actually have its very own blog post, because I think it’s very interesting psychology. My heart rate was also creeping back up. I didn’t drill it, but I rode faster…waiting and saving. I could see Amanda and Kelly way ahead in some spots. One spectator on a hill even said, “Wow! You rode that part waaay stronger this time!” I said, “I was recovering all last lap. haha”

Lap 5 – “GET IT GIRL!”
I was back. Full throttle. I ended up catching Kelly Cullen in the first 5 miles(she’ll be back to whooping up on me very soon, I have no doubt!), and saw Amanda. I ended up catching her as well and passing. At that moment, we were catching part of the XC race that had started and it was freaking deja vu from laps 1 and 2 except the stakes were higher. She and I riding together, trying to pass loads of people, wasting energy, jockeying back and forth. I simply could not shake her! And then I did something. I beat myself. The race hadn’t ended, but in my mind, I told myself that she was going to pass me and she did. The end was a mad chase. We were both out of the saddle, groveling into the wind. She put a gap on me, and was slowed down again by traffic on the course. This was the common theme – work your ass off to put a gap on your competition, get stuck behind a train of people, lose your gap and momentum, waste energy, repeat. It made the actual racing part more than just you vs the other ladies. There was a luck factor and it was extremely frustrating to everyone. We all took turns with this painful cycle.

In the end, it came down to a sprint between Amanda in myself. I have actually never had to sprint at the end of a mountain bike race, let alone a 50 miler! We were also about 3 minutes back from Kelly Boniface who took the win that day.  This race made me perform at my highest level.  I was forced to go outside my comfort zone, and I also learned some things about myself that I need to work on when the competition gets that cutthroat.

I’m stoked, but I’m starting to see a trend here.  The trend would be mentally defeating myself and losing by a small margin. The trend would be having the opportunity to lead the race, but backing off and sitting back in 2nd or 3rd. I’m definitely NOT saying I would have won, I’m saying that when I get the chance to move into first, I hesitate. My next post will be about that.  Some people say I give too much away about myself online, but being bare and genuine not only teaches you about yourself, it teaches other people to think inward about their tendencies. Not a waste.

Time was somewhere around 3:43.  The course was about 10 min slower than last year overall…so I was about 5-7 minutes faster from last year.  I’ll take it!  Another big training week planned… last week ended up being pretty hefty with the race and all the things I did all week.  I can’t believe at this time next week, I’ll be in GERMANY!!!!!!  I better pick up that German book and learn some stuff.  Also, spring semester is OVER.  2 more pre-requisites in the books.

As always, great big thanks to Warriors Cycling for doing another amazing job and to all the volunteers and spectators.  Thanks so much to everyone for cheering for me.  It was so nice to have all that support and encouragement!!!!