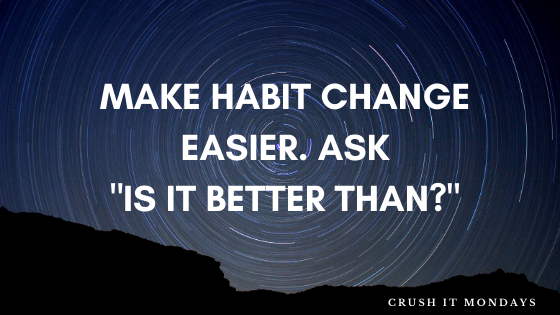 Habit Change Made Easier. Ask “Is It Better Than?” | Crush It Mondays

By Sonya LooneyJanuary 13, 2020No Comments

Habit change is hard, and it’s really hard if you tend to think about your habit change as an all-or-none thing or if you get decision fatigue from too many options.  Have you heard the quote “don’t let perfection be the enemy of good?” Sometimes the idea of not being able to do something perfectly or the idea of having to be perfect at it every day will stop us from even trying.   I came across some discussions in my community lately where one person criticized another because they didn’t change or move the needle enough – this was in regards to diet.

Doing the best you can is a good place to start, but I like to ask “is it better than” when comparing two options.  Asking “is it better than” can also give you a different point of view if you find you are critical of a decision another person is making about their changes.  We can’t be in control of everything all the time and learning to set ourselves up to make the best decision possible for a given situation instead of defaulting to our old ways is powerful. Asking “is it better than” is particularly helpful when it comes to diet. A lot us have guilt or even self-flagellation if we quote mess up.  There is a fine line between letting yourself off the hook too many times versus having a little bit of leeway and self-compassion, but I think we intuitively know if we are giving something our best shot or if we are just looking for excuses. You can feel it in your body.

I’ll give you a few examples. One person wants to stop having dairy in their diet, so they switch to soy milk.

When the person orders a latte at Starbucks, someone points out that the soy milk from Starbucks has added sugar!  Yes, it’s best to have unsweetened soy milk, but having soy milk with a little bit of sugar is still better than eating dairy if you’re trying to avoid it.  Given your options and your decision to order a latte, what is the best choice in the moment?

Say you’re trying to give up meat, but you haven’t gone all the way yet.  Is eating meat a few times a week better than eating it every day?  Yes.  If you believe meat is unhealthy, eating no meat is best but moving the needle to a habit that is sustainable for you is better than not at all.

If you are trying to eat less desserts, but really have a craving- eating a small bowl of granola is better than eating a piece of cake.

Riding for 30 minutes is better than not riding at all.

Picking up a few items of clutter around the house is better doing nothing.

Oatmeal you make yourself is better than processed cereal.

Whole wheat flour is better than white flour, but eating in tact whole grains is best. Maybe you don’t have access to whole grains in that moment or you ran out of time trying to make something.

Next time you feel stuck in a particular situation where you are having trouble making a decision that will align with your goals, just try comparing your options and asking which one is better than the other. 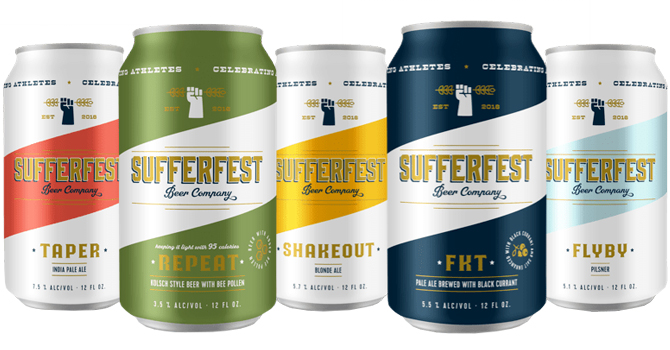