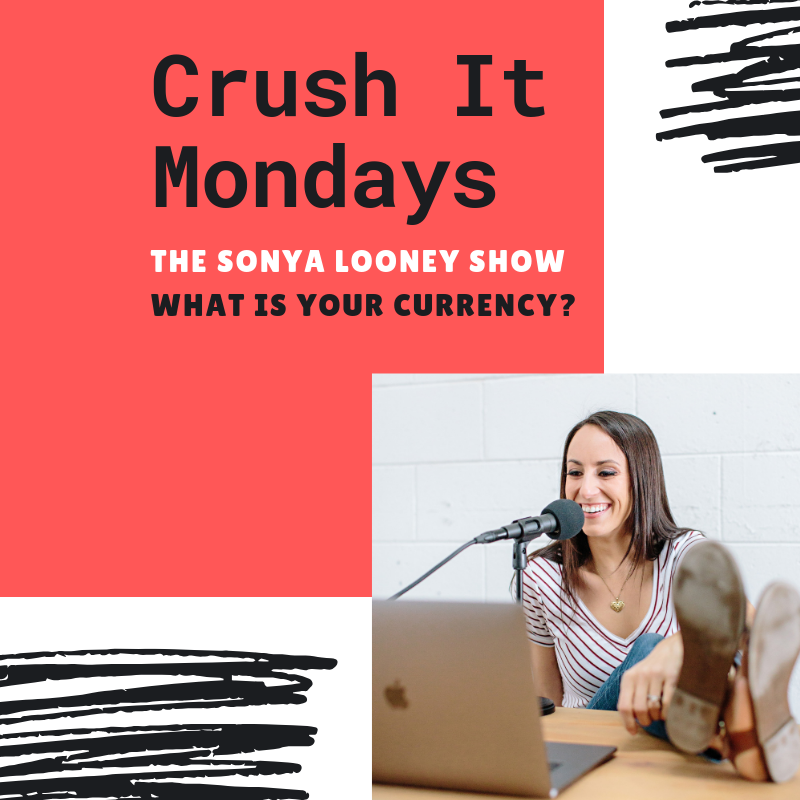 Crush it Mondays: What is Your Currency?

By Sonya LooneySeptember 3, 2019No Comments

This is an episode of Crush It Mondays.  Each week, I’ll bring to you an inspiring message, habit, or contemplation to get your week off to a powerful start.  In this week’s episode, I want to talk about the currency you use to define your life.

I think the majority of our listeners are pretty in-tune to what makes them happy, but a lot of people outside our bubble put their stock, self-worth, or value in how much money they make or the outward appearance of their lives via fancy cars, houses, watches, etc. I’m not saying there is anything wrong with having nice things or making a healthy income, but when you tie your self-worth to external things, it’s not good in terms of long term happiness.  The currency/metric that I think we should be looking to enhance in our lives is not money, it’s not achievements, it’s not things, it’s not race results… it’s happiness.  Happiness and a sense of flourishing are what gives our lives value and meaning.  While that might sound obvious, it’s easy to get stuck in the trap of knowing it, but our actions saying otherwise.  I’ve gotten stuck in this trap many times, specifically with feeling bad about how much money I’m getting to do something if it feels like I’m not being valued and with the harsh self-judgment if I am not living up to my own expectations with an outcome based metric.  It’s human… but it’s having the awareness of when you’re doing it and then reinvesting your time, your focus, and your energy into the things that increase your happiness that can help get you unstuck.

Examples would be if you don’t get a promotion or even lose your job, you feel like you are not a valuable, smart, or useful person.  Another example would be if you don’t achieve a certain result or time goal in a race, or even simply if you don’t achieve a goal you set out to hit in anything, then you’re not worthy.  Earning money and feeling validated financially for your effort DOES feel good.  Winning a race or hitting a goal DOES feel good.  But those feelings of happiness or worthiness are temporary and as I said in a past episode about the danger of saying, I’ll be happy when I do or get X, you are actually putting your happiness stock in an external metric and you’re also putting your happiness into the future.

Once our needs are met, I think our goal should be, “how do I make myself happier today” as a first goal.  I’ve mentioned several times that I badly struggled with burnout last year.  I have an incredible life, but I did not feel happy because I was simply trying to do too much so I could achieve. It might sound strange and it definitely feels strange, but I’ve worked really hard this year to do less, to expect less, and strip down what it is about the things I’m doing that truly make me happy.  The answer has been spending more time with people, traveling less, working less, and worrying less about “getting left behind.”  I also am spending less time comparing myself to others on social media. I am definitely not immune to any of it, but I’ve put “what makes me feel happiest today” as one of my main objectives.  It takes courage to step off the crazy hustle train if it’s out of control…and the funny thing is that if I look at the results of my goals, I’ve actually been more successful this year achieving them by working less. (I don’t mean be lazy, but I was working 7 days a week and almost all hours when I wasn’t sleeping).  Hustle culture and finding the right amount of pushing is a topic for another day!  So happiness. I realize that happiness, positivity, and motivational quotes can be overused or blown out of proportion.  It’s unrealistic to be smiling and feel good all the time, but if someone were to ask you on a scale of 1-10, how happy are you on average, it’s a good starting point.

What can you do to increase happiness?  I’ve also mentioned this in an earlier episode, but I think it’s important to repeat.  In Positive Psychology, happiness has been defined in terms of doing things that bring meaning to our lives, having a purpose greater than ourselves, spending time with people that believe in us, making time for concentrated attention doing something (without distraction), and I want to add exercise and spending time in nature.  That’s a very broad description.  But let’s get even more granular. If it’s still hard to figure out what makes you happy, and also – knowing that what makes you happy may change an evolve as life ticks on, I have some tips.

For one week, at the end of each day, write down a bunch of things that made you feel happy or things you feel gratitude for. You can even score them on a scale of 1-10.  I also think writing down next to it how you can do more of those activities daily can help. If you feel like that’s too hard, make a list of all the things that make you unhappy, write out why they make you unhappy, write out if you have control over it.  If you can control it, write down what you could do to change that.  One example for me was feeling rushed or late makes me feel stressed and unhappy.  I was feeling rushed because I was trying to pack too many things into my day. I had control over that and the solution was doing less. And I’ll tell you- the answer to everything that was making me unhappy was either doing less or slowing down.  But that is just me!

I often audit what I’m spending my time or energy doing and try to shift accordingly so I can make my primary goal life satisfaction which I equate to happiness and a sense of flourishing.  I hope this episode helped give you some clarity or direction so that you can think more about what makes you feel better in your life too!