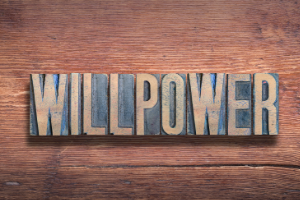 How the heck do you boost willpower and what is willpower?  It’s another word for self-control.  How many times have you blamed a lack of willpower for failing to change a habit?  Don’t worry, it’s natural and all of us do it.  There’s a reason why a large percentage of New Year’s Resolutions fail and why it’s so hard to make habits stick.  We say “I won’t do this thing anymore” or “I will do this other thing every day.” We stick to it for a while, and then the wheels fall off.  It’s not that our intention isn’t there – we truly want to do those things.  So why can’t we stick to it and how do we boost willpower?

It turns out relying on willpower alone does not work.  The topic of willpower has been a focus of numerous scientific studies over the last several years.  Are there areas of the brain responsible for willpower?  Why do some people seem to have more willpower than others?  How do we have more self-control?

There are a few different schools of research that I wanted to share with you.  Addiction has been a driver of some of these studies to help people make lasting change.  There are a few books I want to recommend if you’re interested in the science behind the topic of will power.  Pick up The Willpower Instinct by Kelly McGonigal Ph.D. and also The Craving Mind by Jud Brewer.

Based on the findings from these books and other studies I read, what can you do to set yourself up for success?  According to a 2012 study by the American Psychological Association, the main habits people are always trying to improve upon are eating healthier, exercising regularly, lose weight, reduce stress, and get more sleep.

How to Boost Willpower

Give these techniques a try and let me know how it goes!