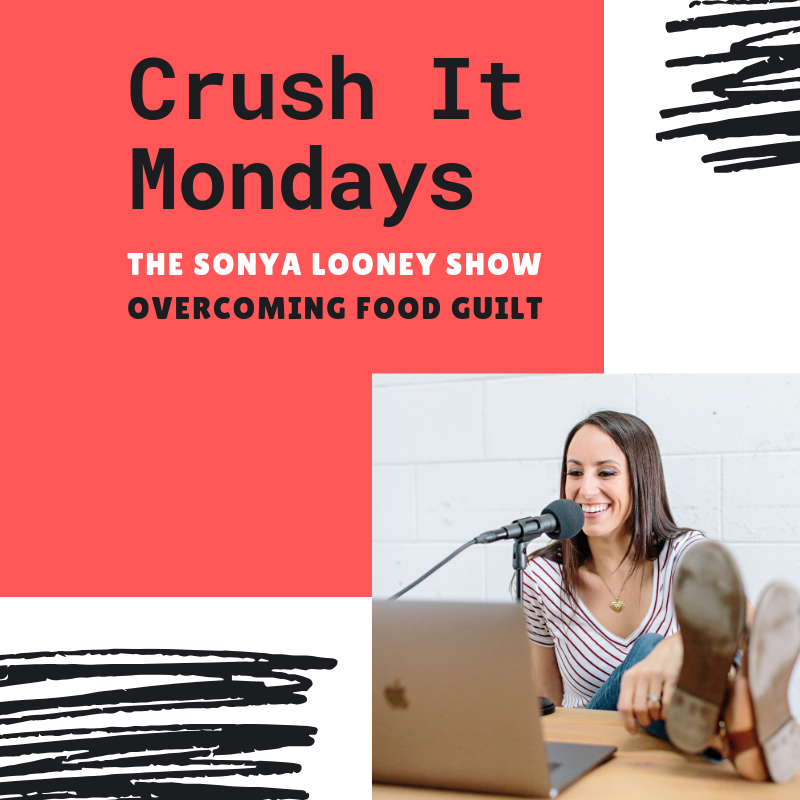 By Sonya LooneySeptember 16, 2019No Comments

This is an episode of Crush It Mondays.  Each week, I’ll bring to you an inspiring message, habit, or contemplation to get your week off to a powerful start.  In this week’s episode, I want to talk about food guilt.

When I started organizing my thoughts for this podcast, I thought it would be quick and easy.  Boy was I wrong!  I have my own thoughts on food guilt, but I like to do research and there are tons of articles out there on this subject.  The question I could not find the answer to is where food guilt comes from?

How many of you have eaten something and felt guilty about it?  I thought that everyone has food guilt, but I realized that some people actually do not feel guilty about eating.  One of my biggest guilt triggers is around alcohol. I noticed that if I cut way back on drinking, then I don’t feel guilty in the morning about it.  But if I’m drinking several times a week, my first thought in the morning is self-flagellation around drinking.  Another guilt-trigger for me is around eating things like french fries or processed foods.  I told my husband about how I wake up feeling less guilty if I am drinking less alcohol and how I don’t really feel different in terms of energy level or health when I don’t drink (I rarely have more than 2 drinks), but I feel less guilty when I don’t drink.

He said, “You feel guilty about eating and drinking?”  I discovered he rarely experienced food guilt.  The next instance was a conversation with my dad. I was telling him about my observation with myself and he also told me he never feels guilty about eating or drinking.  This was fascinating to me because I thought that food guilt was normal, and trust me, after I did some research, I found out that it is typically more common in women (in fact, over 75% of women experience food guilt) and it’s also common in men.

So why do most of us have this relationship with food?  Here are some thoughts – and if you have more to add, I’d love to hear yours as well.  Feel free to leave a comment on my website under the show notes.

I don’t know where this guilt spiral started, but I paid attention to how we simply talk about food or how it is talked about in the media. How many times have you heard things like “sinless chocolate cake,” a “guilty pleasure”, or “guilt-free comfort food.”  Or have heard someone say “I’m going to be bad and have a cupcake.”  This type of talk contributes to the problem of assigning a good or bad feeling for our food.  I’ve struggled with disordered thoughts around food and negative behaviors, especially when I was younger so I think about this stuff a lot.

Step 1. Stop labeling food as good or bad, or using the world guilty with food.  Pay attention to the words you use.

The next reason we feel guilty (at least from my own experience) is we set rules for how we eat and if we break a rule, then we feel bad.  We feel bad because we have broken a commitment to ourself. It’s not the food itself, it’s the broken commitment and what you think that commitment says about you as a person.  Try to decode why you feel guilty and I bet this will come up.  I don’t have an answer about food rules. I think we need to have a general belief system around how we want to eat to thrive. Personally, the guilt comes when I either have rules that are too strict.  It also comes when I break the rule and have a lot of negative self-talk around that.  Can you create more moderate rules around food that give you some wiggle room? I noticed that when I did that, I actually enjoyed the wine I was drinking and didn’t wake up with guilt.  Or I truly enjoyed a couple of cookies without remorse.  People that have guilty thoughts or unhealthy feelings toward food probably also have some issues with perfectionism, fear of fatness, or control.  I also need to take a sec to say I am do not have PhD in Psychology, nor can I diagnose true disordered thoughts or disordered eating. If you do think you have a problem, it’s important to get professional help.

Step 2. If you need rules, create moderate ones that are easy to meet.  I don’t believe in dieting to lose weight. I believe in developing a lifestyle where you trend in the direction of what you consider healthful eating. For me, a plant-based lifestyle has worked best and has also improved my relationship and feelings around food although I’ll never be “cured” of food guilt. Find what works for you and that is something you can sustain.

We still break our moderate rules from time to time. We make exceptions because of social plans, maybe we simply had a craving that we wanted to indulge (and see, is using the word indulge propagating good and bad? I think so!), things happen.  If we break even a moderate rule, we get into the cycle of beating ourselves up. I shouldn’t have done that. We make amends to never do that again.  If you do go a little farther than you wanted, acknowledge what you did. You’re not weak, you’re not out of control, you’re not a bad person.

Step 3.  Practice self-compassion– what would you say to a friend who came to you and said, “I feel really bad about myself because I ate too many cookies today.” You probably wouldn’t berate them like you would to yourself. Sometimes we need to give ourselves a break!  If you find that you are “breaking your rules” all the time, it’s time to rethink a few things. Is there another underlying issue you can identify- are you stressed, bored, or maybe your rules aren’t moderate enough?  It’s such a tricky topic because food addiction is a real thing too.

This is also a difficult topic because you don’t want to always let yourself off the hook when your behavior is less than desirable, but you also have to forgive yourself and try to be better next time.

Asking yourself “why” when you feel guilty can give you some insight, being aware of how you talk to yourself and how you simply talk about food, not restricting yourself but committing to a lifestyle with enough moderation where you don’t feel like you have to attain perfection, practicing self-compassion, and also working on self-acceptance of your own body. I know- easier said than done. There is no endpoint. There is no “ahhh, I’m cured of food guilt!”  But there is simply your awareness around your feeling of food and trending in the right direction.

Give Back to the Show