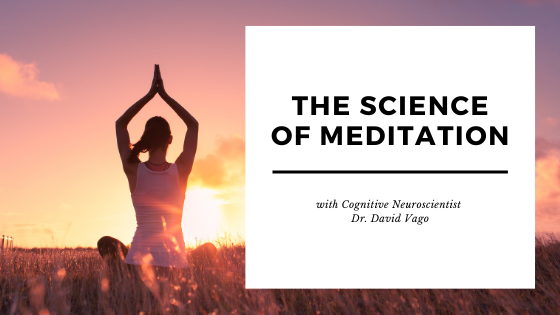 Rewiring the Brain: The Science of Meditation

By Sonya LooneyMay 3, 2021No Comments

Dr. David Vago is a cognitive neuroscientist and a resource director at Vanderbilt University Medical Center who studies the science of meditation. He also maintains an appointment as a research associate in the functional neuroimaging lab at Harvard, where he also used to work.

If you’re not inspired or impressed yet, he held the position of senior research coordinator for the Mind and Life Institute, and currently supports the Mind and Life Institute’s mission as a fellow by advising on strategy and programs. He’s worked with well-known people like Jon Kabat Zinn and even the Dalai Lama. Some of his work includes studying the science of meditation through looking at brain scans of meditators to determine enhanced areas of blood flow and activity. He’s also been part of numerous papers that help define mindfulness.

In 2017, he did a popular Ted-Talk called Self-Transformation Through Mindfulness. Dr. Vago’s interest in meditation began in his early twenties when he went on a 10-day silent meditation retreat at the suggestion of his uncle. His interest in neuroscience and meditation crossed professionally after conducting a study showing that meditation, specifically learning how to regulate attention and emotion, helped women with the chronic pain associated with fibromyalgia.

The word meditation comes from a word in the Old Testament called Haga in Greek. It most resembles the Latin word Tasco, and during the classical period, it was just a practice associated with thought, reflection, and contemplation.

Meditation was really considered a general technique of focusing attention and a sustained effect with the aim of deepening concentration, tranquility, and insight. Dating back to the Christian classical period or the Christian point of view, the insight was really about coming to understand the nature of God- becoming one with God.

At the time, the highest form of wisdom was considered to be the ability to reflect upon oneself, so meditation boiled down to any practice that involved the self-regulation of attention.

Meditation can be used for the pursuit of wisdom, as Aristotle suggested, or it can be done in theological tradition to focus on oneness with God. Another option is to do it to reveal the nature of your mind.

Later on, Sanskrit scholars and Hindus had their own descriptions and words for meditation. All three of the common terms for meditation directly translate as cultivation or mental development. The English word “meditation” became the translation for the Sanskrit Tibetan words that meant “developing familiarity with one’s mind.”

From the Buddhist point of view, you can’t really have mindfulness without compassion. Compassion is a big part of how we view the world in an altruistically motivated way. The idea is that most of what we’re doing is trying to reduce the suffering of those around us.

These concepts were then synthesized into an Americanized, Westernized definition. Mindfulness is described as focusing attention in a particular way, on purpose, in the present moment, or non-judgmentally. That’s the simplest way to describe how to cultivate a state of mindfulness.

The Science of Meditation and the Brain

For people who can’t tell if meditation is actually doing anything, or for those looking for the cold hard facts, this section is for you. Before the year 2,000, there wasn’t a lot of research on mindfulness or meditation. However, that has all changed and now there are about 8,000 articles on mindfulness and the science of meditation.

Certainly, not all of it is good research, but the amount of research is growing nonetheless. There’s a lot of research happening and we’re getting better and better at understanding how the brain changes when these practices are integrated into our lives.

Learning a skill, even something like juggling has been shown to change the brain. This is one of the gross misunderstandings about neuroplasticity, or how brain activity changes.

We know the brain is constantly changing. Our life can be broken down into 500 millisecond moments, which means we think about 63 million moments in a year. Each moment is an opportunity to change your brain in a positive way, a way that can be adaptive, a way that can help you flourish. Alternatively, negative moments or changes can contribute to psychopathologies like depression, anxiety, and stress-related diseases. This means that what you fill your mind with really matters.

After eight weeks of training, for example, you can change the physical structure of your brain. The question is, how is meditation changing your brain in relation to the benefits that it may give you?

There’s one brain network called the frontal-parietal network, sometimes referred to as the financial credit control network. It involves the main brain region right behind your forehead called the frontal polar cortex. Why is this area so important? It turns out that between two and three million years ago, our earliest hominid ancestors learned how to create fire, use language, and tools, and do all the important human skills- and this was the area of our brain that changed. It changed in size, ability, and meta-awareness.

The frontal polar cortex is the first important area in meditation. It grows in size, which means that the more one meditates, the larger that particular brain region becomes. This leads to more activity in that brain region during meditation practices. Essentially, you’re flexing the mental muscle when you meditate, which allows you to become better able to remain focused.

That area of the brain is not necessarily bad- it’s good for maintaining a sense of self and for planning some aspects of the future using memories. However, it can become distracting. When you’re in the middle of a race and all you can think about is the guy who cut you off, that is the posterior cingulate cortex at its finest. Meditators have the ability to regulate that particular brain region to essentially turn off the distractions. You’re able to get into that flow state by avoiding getting stuck in the narrative.

Half of our lives are spent in our narrative, in that space of just ruminating, and unfortunately for the majority of us, it’s usually negative content. We’re usually talking or thinking about how bad we were in that race, how we’re not going to be as good as we can be, etc. Self-reflections in this ruminative state can be really problematic. Whatever you fill your mind with affects your biology, your physiology, and the longevity of your whole body.

Finally, the insula works with the frontal polar cortex, which is important for salient detection and body awareness. This is what helps us become more aware of bodily sensations, and what’s happening around our body and inside our body. It allows us to detect things in the external environment and embody that experience instead of avoiding it.

This is an area that is more active during meditation. It also seems to be preserved from atrophy or shrinking as we age. The brain generally starts shrinking in mass after the age of 21, but meditation research shows some evidence of preventing this from happening.

Not only is meditation helping with meta-awareness and regulating your emotions, but it’s also protecting your brain from shrinking as you get older.

After years of being on the outskirts, meditation is finally becoming normalized. In fact, many groups and industries have chosen to incorporate modes of meditation into their training and systems.

A program at UBC teaches the science of meditation and mindfulness to nurses and others in the medical fields. But, how big is this actually becoming?

It’s not only in healthcare environments, though you see it in every hospital. It’s becoming the standard care for all psychological treatments. Traditional evidence-based practices like cognitive behavioral therapy, CBT, can be mixed with mindfulness for really positive outcomes, especially when it comes to anxiety, preventing relapse and depression, and pain management.

Just like you go to the gym to work out your physical muscles, mindfulness is a form of mental training. You use it to train your mind, to help regulate your emotions and cognitions, to be more conscientious about what’s happening around you, and to be aware of your own mental habits.

You see meditation used to help reduce burnout in care providers and caregivers, as well as in nurses and doctors who are experiencing burnout due to the volume of patients they have to see.

It’s also becoming more popular in schools as a way to supplement social and emotional learning, and many military groups are also incorporating mindfulness into their training curriculum.

The bottom line is that studies and uses for meditation are growing astronomically, and we’re only scratching the surface of what meditation does.

To hear more from Dr. Vago on this topic, you can listen to the podcast or check out his Ted-Talk on Youtube. If you want to continue working on your mental training, check out the Moxy & Grit Mindset Academy to unlock your potential.