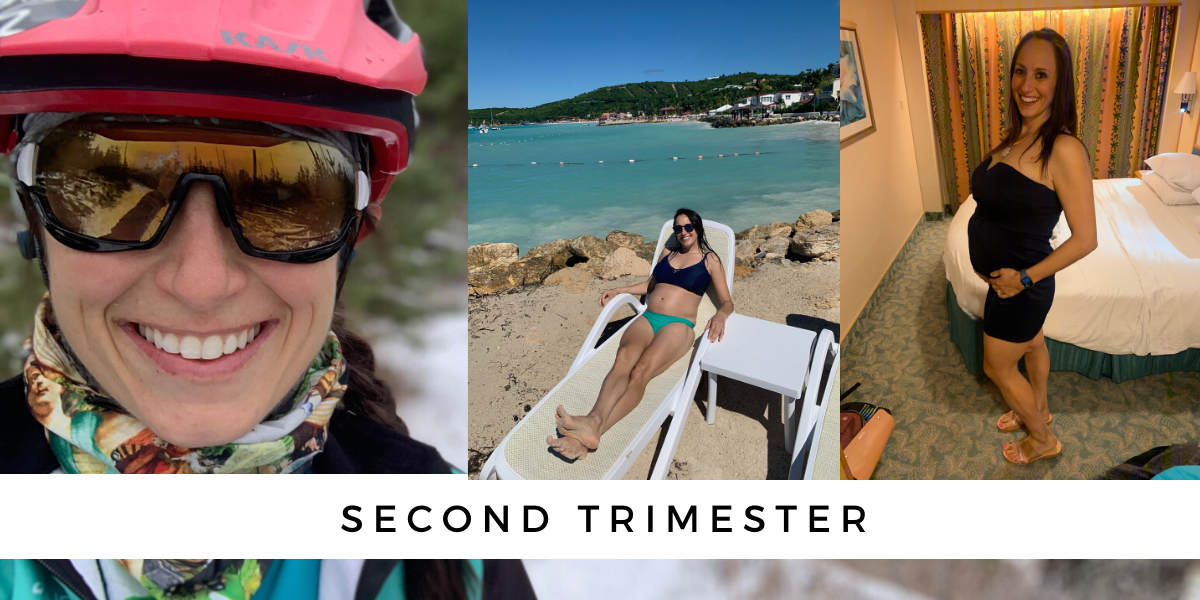 A Fall Vacation and Second Trimester

By Sonya LooneyJanuary 6, 2020No Comments 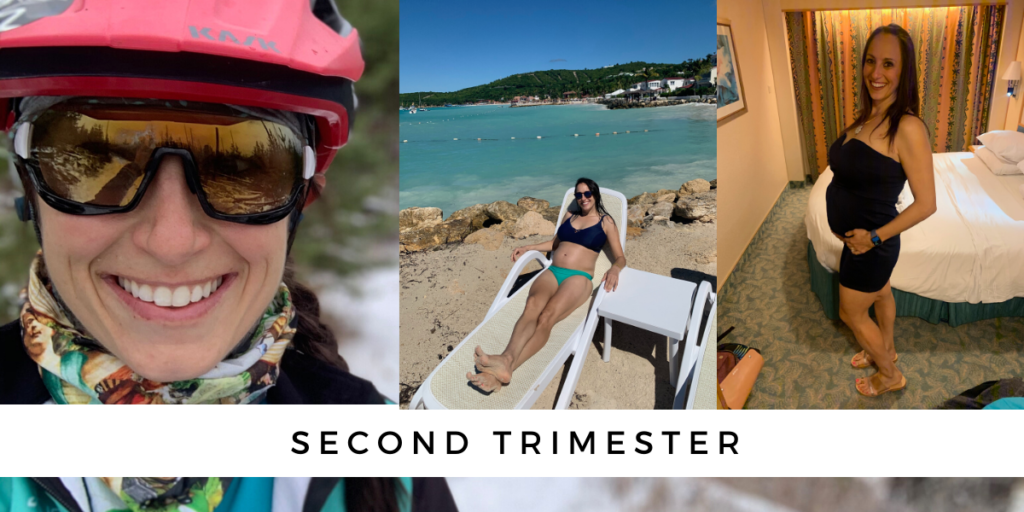 The last few months have been better!  Sorry I didn’t post this sooner as I’m now well into my third trimester at the time of publishing!  I’ve been working my butt off trying to get a couple of months of episodes ahead with the podcast before baby comes.

We went on a vacation in October to NYC (Matt had a conference) and then decided on a vacation that wasn’t about riding bikes.  We did have fun riding the NYC CitiBikes to get around including a loop in Central Park! 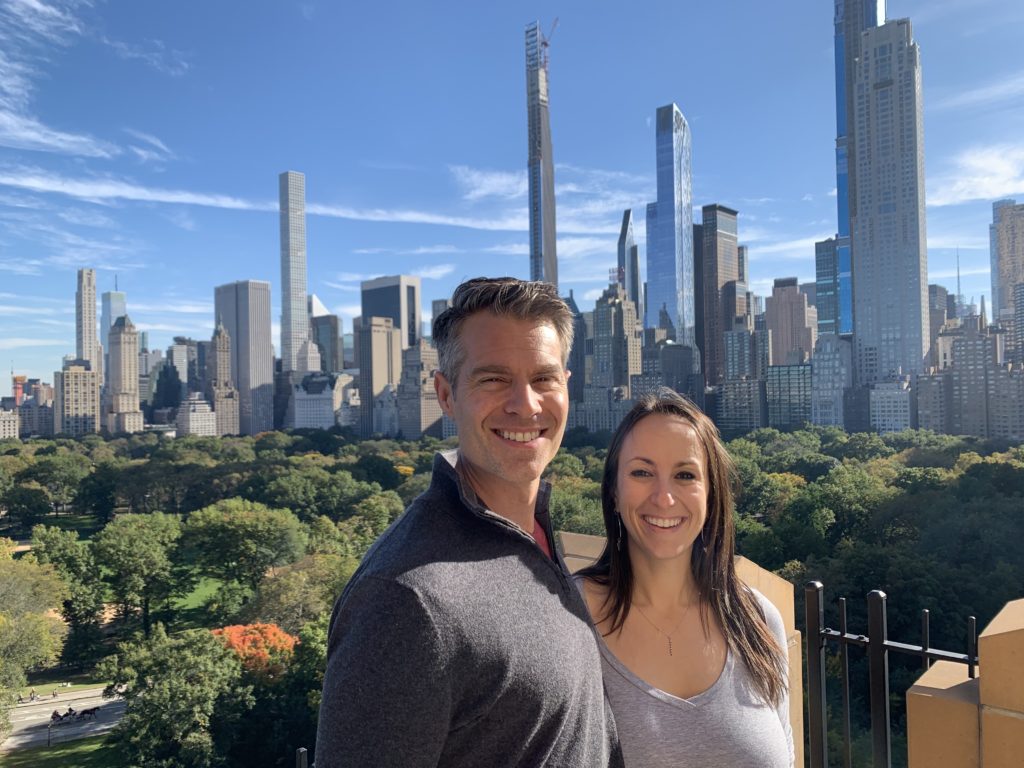 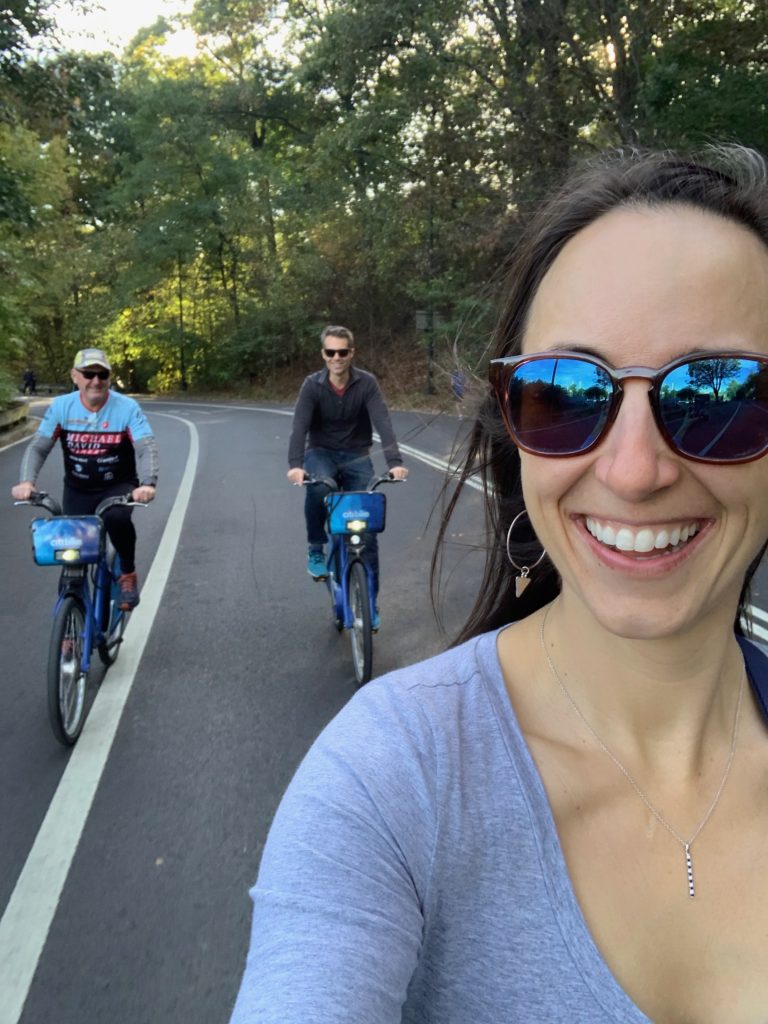 We went on a cruise to the Caribbean which is the same thing we did for our honeymoon. I really enjoy occasional trips like these because they help me disconnect- I basically don’t use my phone, there is no pressure to ride because I don’t have my bike, decisions and entertainment are built-in, and most days were spent swimming, snorkeling, or walking around different islands in the sun.  We still went to the gym and did a run, spin bike, or weight training most days, but our days did not revolve around our exercise which is the general mode when we travel (or any day at home!).  The crazy thing is that as terrible as I have felt on my bike, running on the treadmill felt awesome. I wanted to seriously hammer and had to hold myself back because I didn’t know really where a safe limit was, especially because I haven’t been doing much running.  My body and perceived effort limits me on the bike and makes it easy for me to decide how hard to go.   It felt good to feel fast and strong but I kept it short.  Another weird thing is that I wasn’t sore when normally I’d be sore from an effort like that after not doing a lot of running beforehand. It was great to take a break from everything at home, away from worrying about sponsorships and having nerve-wracking meetings, a break from constantly thinking about being pregnant, from playing mental tetris to get myself to accept where I was at on every single ride at home, just be with Matt with no real agenda or work to do, and relax!  I did get food poisoning one day which sucked and I was a little bit worried about what that meant for the baby.  I was also a bit nervous to be away from our medical system if something happened. I was 20-22 weeks pregnant during the trip and anything serious was unlikely, but it was still on my mind! 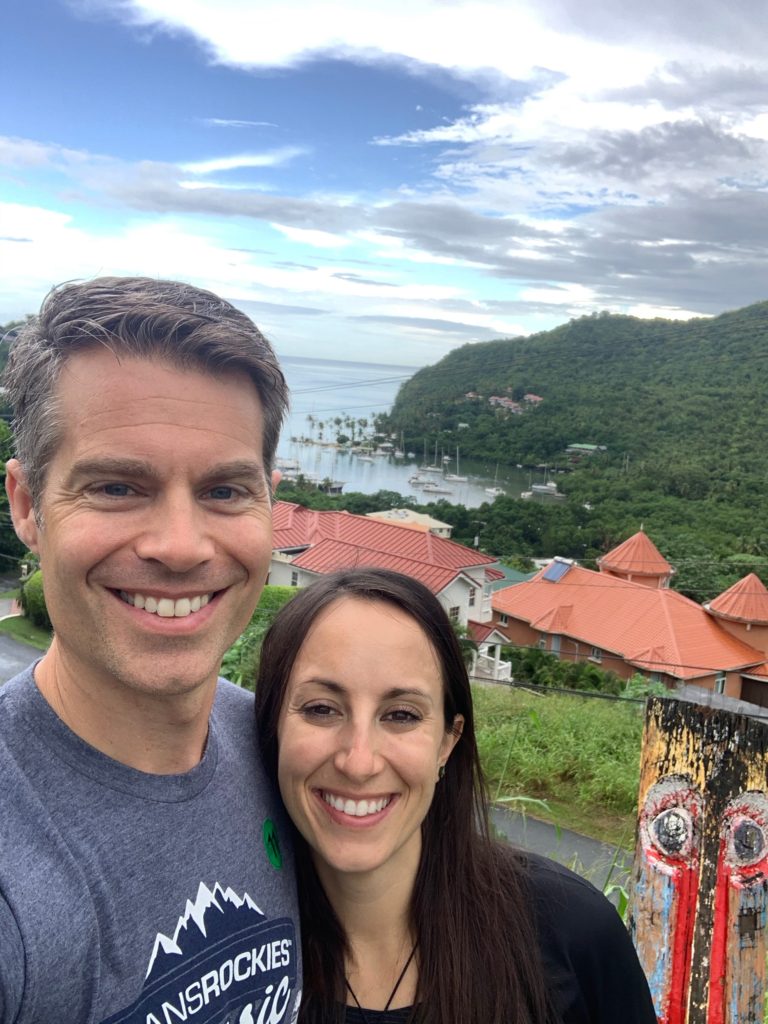 I think I was in denial about how much my belly was showing!  There were island locals who would say things like “hey momma!” and I thought it was a figure of speech like saying “hey lady!” But then others would point at me and yell “It’s a boy!”  It WAS kind of nice to be in a bikini while pregnant because there were no feelings of “I wish I looked better” or any feelings of self-consciousness. Yes- even though my chosen beachwear is a bikini, I’m generally self-conscious or ashamed in my swimsuit because of my own messed up body image issues.  Being pregnant was kind of awesome because I wasn’t worried or ashamed of not having ripped up abs!  The baby’s movements also got more pronounced during this time from fluttering to poking that Matt could even feel.  It was really exciting and fun because the movements I could feel from the outside with my hand just made this whole thing seem more real. I love it when he makes big movements. 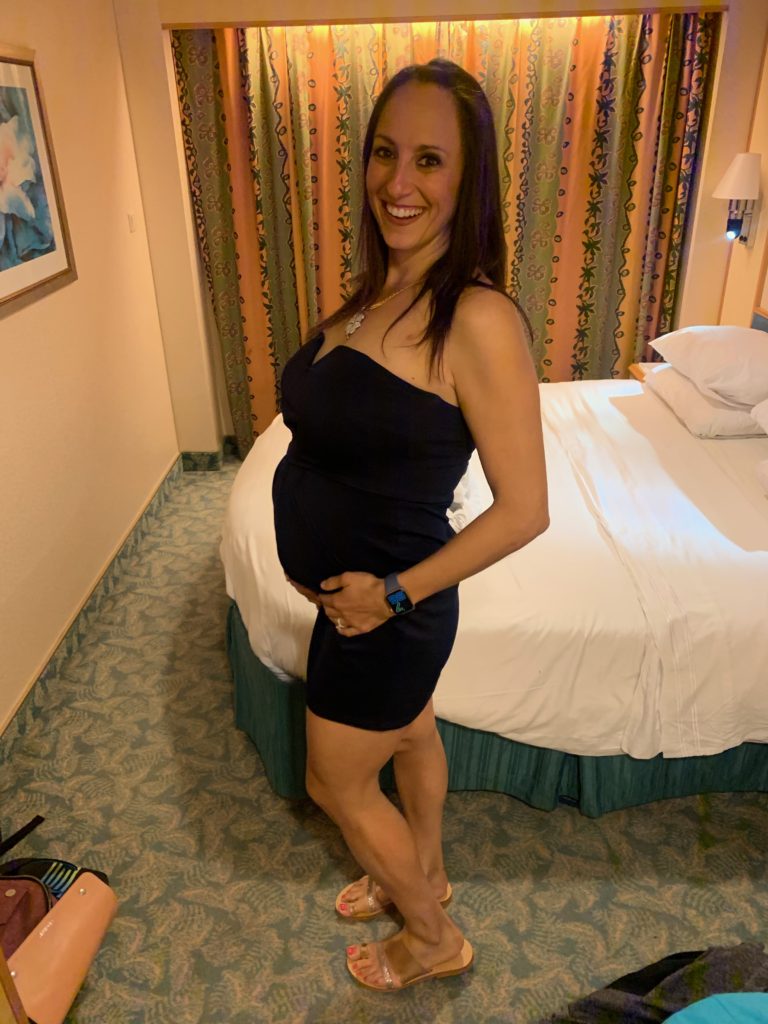 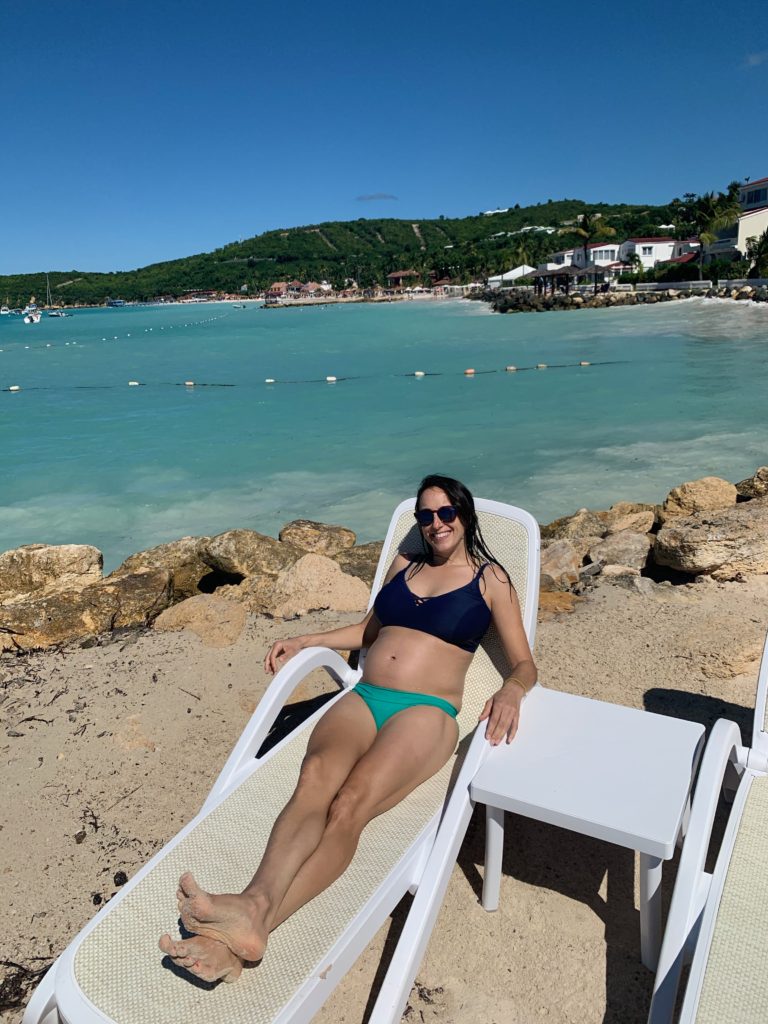 I ended up getting the flu on the last day of the trip – these cruise ships have superbugs! The travel home was absolutely miserable and I had never been so happy to see my own couch and bed.  Matt got it too, so we spent a bunch of time on the couch. The bonus was we got to binge-watch (Suits) on Netflix guilt-free!  I read that getting sick while pregnant sucks because it takes longer to recover- and it’s true!  I was sick for a month and for half of that time, I was too wrecked to work or exercise.  I still got a flu shot after I recovered because my guess is sicknesses going around on cruise ships are different than regular strains of the flu.  I was so thankful when I got my energy back after being sick for so long. It’s so easy to take our health for granted!

My second trimester was WAY better than the first although it took some time for my energy to come back. It wasn’t like a light switch flipped when the weeks turn over into second trimester.  It was gradual- and I definitely never got back to my “normal energy level.”  I think blog posts you read about second trimester make it sound like you’ll feel like your old self again.  I did feel better and was able to be more productive, but I think it’s an exaggeration to say it’s the “honeymoon” phase of your pregnancy!  I was still in bed by 10PM every night on our vacation and a 10 hour workday would crush me.

By the time I recovered from the flu, third trimester was just around the corner.  Riding was still hard, but as I mentioned in a previous post, I felt better and I also was able to reduce my expectations and weird rules about how many hours per week to ride.  I still have goals for weekly hours because I like to have them, but I’m able to give myself a break if it’s not the right thing.  My goal has been to be consistent with my riding and I’m proud of my consistency on the bike during my pregnancy.  My goal is not to be fast, hit any numbers (because let’s face it, I get slower each week). I feel proud to just  overcome excuses and show up.  Getting sick definitely put several weeks of 0 hours of exercise, but I know that riding regularly is going to make my birth, recovery, and getting back to training eventually go more smoothly.  It also just makes me feel like myself. I’ve ridden my bike almost every day (with the exception of rest days, travel days, sick days, etc) for 16 years.  I think if you’re pregnant, doing something each day that makes you feel like yourself is really important for staying grounded as your body goes through crazy changes. 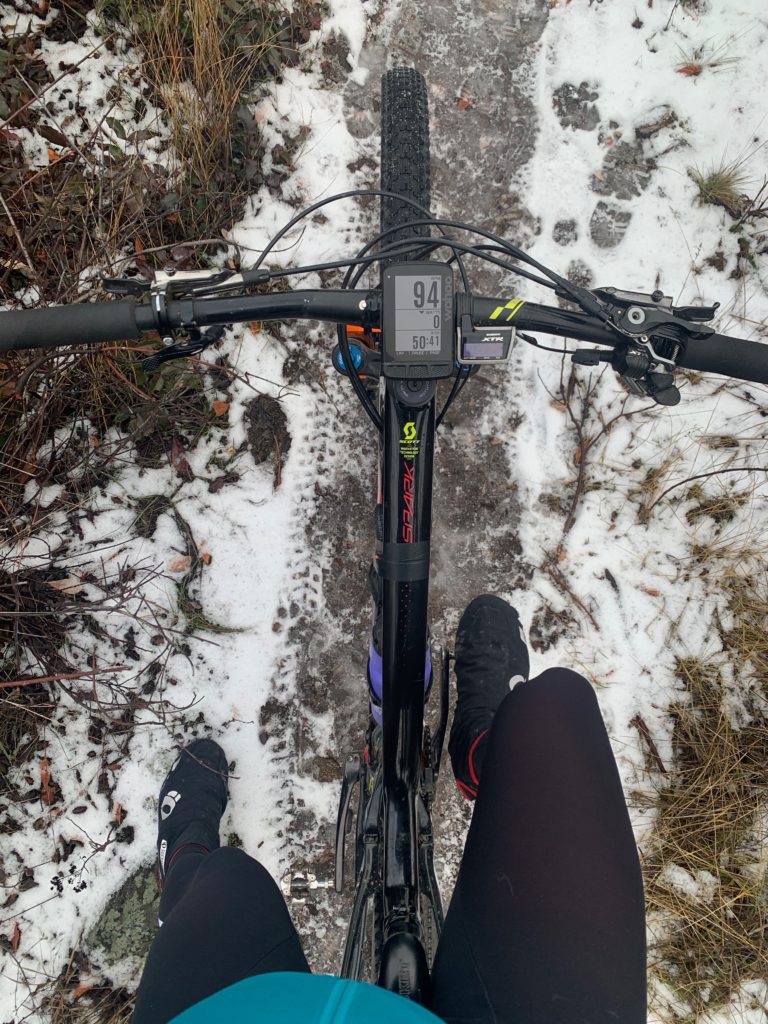 Some people are perplexed about my desire to exercise the amount I’m doing because I could be spending this time taking a break.  I’m doing a lot less than I was, but I just love to ride my bike.  I like the sense of accomplishment of showing up every day.  As I mentioned, I’ve been a cyclist for 16 years and it’s because I love to ride my bike.  Being active is a big part of who I am and part of my values.  I’ll be writing more about this in my next post, but there is a lot of judgment out there about pregnant women and our activity level. No one cares more about the baby’s health than the mother.  Every person is different too- some people might feel terrible if they exercise a lot or go mountain biking.  And that’s okay too. 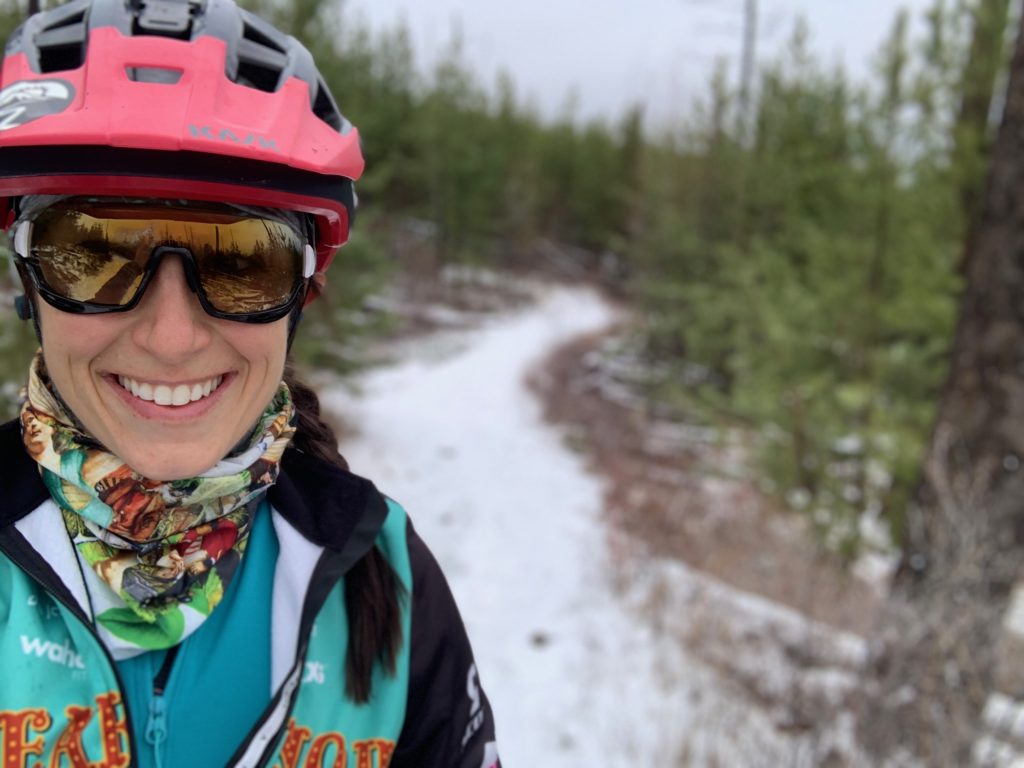 Sleep has been hard. I’ve had sleep issues pretty much my whole pregnancy. I fall asleep no problem, but I wake up a ton of times during the night.  I have also been incredibly stressed out about my sponsorships and I was waking up at 3:30 in the morning and just laying there for an hour wondering why people are ignoring my emails, searching for ways to let it go, and being frustrated with not knowing what is going on. There was also a stint where I was waking up hungry in the middle of the night and I’d get up and eat a bowl of cereal or keep nuts or a granola bar next to my bed!  I also started reading baby books (instead of pregnancy books).  The one I like the best so far is called “The Baby Whisperer” by Tracy Hogg.  There’s another called “Bringing Up Bebe” by Pamela Druckerman. Both are basically how people raise their kids in Europe and both books have very similar baby care techniques that resonate well with Matt and I.  I know books can say one thing and once you  have a tiny human being on your hands, the book might not work at all, but I like to at least have an idea of a starting point!

I’m starting to get excited about this little guy because my thoughts now are less on things going wrong with being pregnant or fighting against how my body has changed as a pregnant person and more on actionable (and fun) realities and challenges of what it’ll actually be like to have a real live baby!

We definitely missed our little Baxter while we were gone! 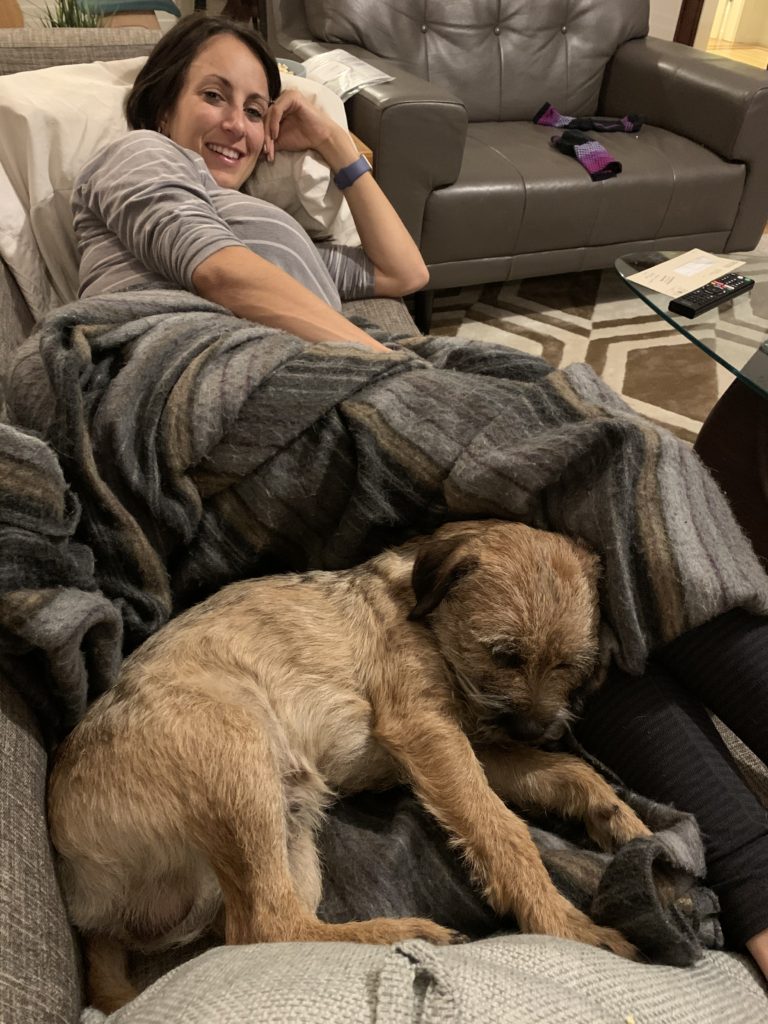 Baxter playing nurse while we were sick