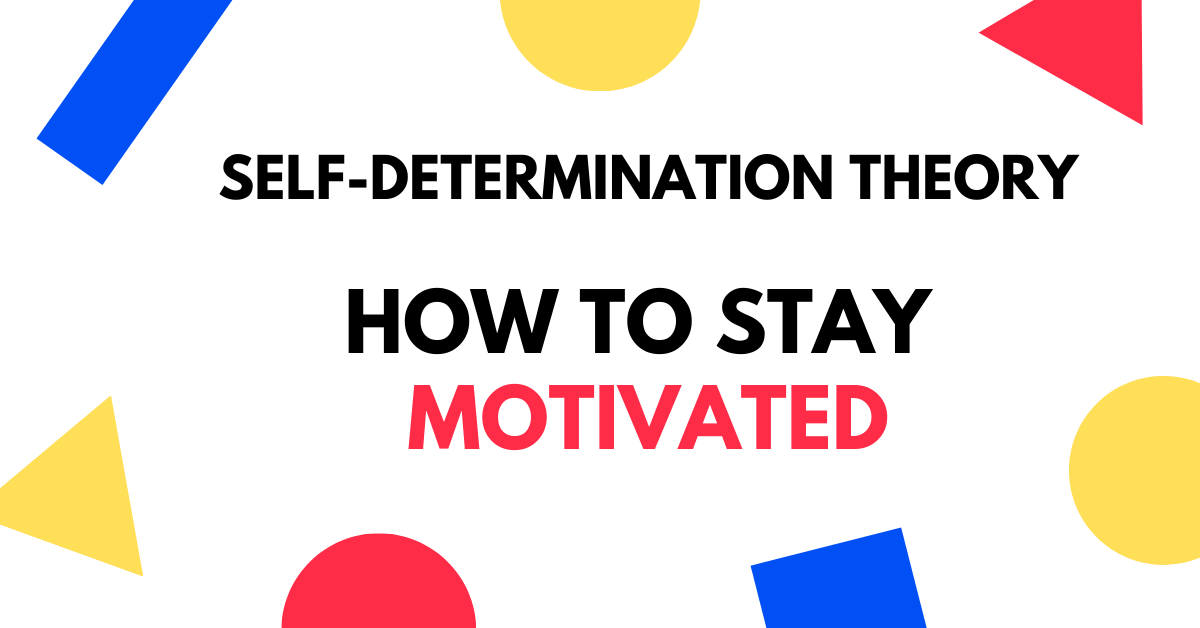 Self-Determination Theory: How to Stay Motivated

By Sonya LooneyMarch 1, 2021No Comments

How does self-determination theory relate to motivation? Sometimes we’re motivated by external factors, like a race result, a promotion, money, a number on a scale, or a leaderboard at work (extrinsic). Other times, we’re motivated because we simply just love doing something(intrinsic). Usually, it’s somewhere in the middle.

So, whether you’re leading a team, or you’re your own boss, how can you motivate yourself and others in a positive, proactive way?

We turned to Dr. Heather Patrick and her research. With a Ph.D. in social psychology, she has an evidence-based perspective on the subject.

Her background includes an impressive track record as the health scientist and program director at the National Cancer Institute for 5 years serving as the Associate Director of the smokefree.gov initiative. She’s also passionate about health coaching and running.

To dive deeper into her research, you can find her work at selfdeterminationtheory.org. Many of her papers center around healthy eating and wellness protocols.

What is Self-Determination Theory?

From a psychological perspective, motivation starts by understanding self-determination theory. This theory has a lot of broad application, particularly around how we motivate ourselves and how surrounding circumstances can support or get in the way of achieving our desired behavior changes.

The Continuum of Self-Determination Theory

One of the things that self-determination theory has done is reframe our understanding of motivation as existing along a continuum, rather than two separate sources. Not all extrinsic motivation is the same. The way the theory has really outlined this continuum is by using rewards and punishments.

An easy example is how motivation related to food. There are ways that we inflict psychological rewards and punishments on ourselves, like how we celebrate successes and deal with failures. When we eat “good foods,” we feel really great about ourselves, and when we eat the “bad foods,” we hold on to the guilt.

This is part of what makes it difficult for someone to stick to any behavioral pattern or routine that they’re trying to establish. The guilt might work okay in the short run, but ultimately it just makes you feel terrible about yourself. Guilt actually weakens willpower.

As you work your way through the continuum, you get into the more refined forms of intrinsic motivation that aren’t just about enjoying what you’re doing but centered around responsibility and identity. Identities start to shift, and you stop thinking of yourself as unhealthy, but rather a person who is taking charge of your life. This kind of connection is something that becomes much more sustainable over time. Identity-based habit change is powerful and long-lasting.

Whether you’re motivated or not, much of your energy comes from how your own psychological needs are being met. Many different psychological theories focus on the idea of competence or self-efficacy, but the second to those needs is autonomy, which is a word that sometimes trips people up. This doesn’t mean that rugged individualism or fierce independence, it means being an active change agent.

When somebody is given a plan or a set of goals, it’s really hard to stick with goals that somebody else is inflicting on you. This is part of the reason why, in a quality clinical relationship, there needs to be a collaborative process between client and provider.

This process of working together not only provides a sense of competence, self-efficacy, and autonomy but gives a source of accountability and support.

The knowledge that the people around you (who are important to you) get where you’re coming from, understand and appreciate that you’re doing your best, and are aware of some of the challenges of your process. This provides a kind of unconditional positive regard and relatedness. They’re going to be with you, love you, and support you, even if you’re not feeling great about yourself.

So much of what people struggle with when they’re trying to make behavior changes is dealing with failures and setbacks. Unfortunately, it’s not as simple as addressing the actual failure of the setback, it’s the story they’re telling themselves in their head that’s telling them they’re not good enough. Part of the goal, then, is to create a helpful, safe environment where setbacks are normalized.

You aren’t down the five pounds this month that you were hoping to be down. Even still, what are some changes that you’ve made that have been in support of that goal? Celebrate them! You might not be seeing the number on the scale change yet, but the changes you’ve made are doing a lot for your health, and that is in the service of those goals.

Finally, we want to reframe those failures as micro-successes, because even if you haven’t achieved the ultimate outcome, there are many other little things along the way that have to happen to get there. Recognizing you’ve made positive changes to one or two or three of those things already is a rich source for intrinsic motivation, and the results of those changes can even feed extrinsic motivation.

Self Determination Theory: Bridging the Gap

Particularly with behaviors, like healthy eating and being physically active, there’s a continuum. It’s not black or white, success or failure. It starts with a difficult question: how do we think about progress? How do we bridge the gap and use the gray area to our advantage?

Yes, you learn from mistakes, failures, or the smaller steps along the way, but it goes deeper than that. To bridge the gap, you’ve got to believe you’re loveable, worthy, and enough. You have to learn the art of being gentle with yourself.

Again, this is also not linear. It’s not that one day you “arrive” and you are fully accepting of yourself. You’re just trying to get that inner critic to be a little quieter, so you can develop some skills to help continue that quieting process, and to change your self-talk.

Next, we’ve got to figure out what it is that we love about the goal we’re pursuing. What is it that you enjoy about it? If it’s fitness-related, maybe being in shape feels good. Maybe you really miss being able to run with other people and being at a level of fitness where you can make a connection with other runners and share something that connects you.

It might be worth it to sit down and use this as a journaling exercise and write down the things that you really love about whatever goal you’re going after.

The common definition of autonomy is usually independence, but as it applies to motivation, autonomous motivation means you’re acting from a sense of personal choice.

Social Media as a Motivational Tool

Social media is something that can be really fantastic because it’s a way for people to connect to other people who are pursuing similar goals. There’s something really fantastic about having comradery with others and sharing in suffering and success.

Social media can be valuable, and support autonomous motivation by creating a sense of community and connectedness.

When social media is used as a space for negative competition, not for the healthy growth and expansion sort of competition, when it’s not authentic, it can be less useful. One of the potential pitfalls of social media is the presence of filtered, manipulated success stories. This creates this idea that everybody else is succeeding just fine, and therefore there must be something wrong with us, or our process as our life looks entirely different.

Habits are not volitional behavior. Habits are things that you’re doing automatically or without thought. It’s easy for people who focus on habits to become frustrated because the word “habit” is applied to behaviors like healthy eating. In reality, a habit is better described by putting a seatbelt on.

You get in the car, you have no idea how the seatbelt got on. Healthy eating, exercising, quitting smoking, or getting good sleep doesn’t work that way. It’s just not realistic. It always requires a choice.

You need to give yourself a bit of a runway to get used to things being different, whether that is starting a new exercise routine or adjusting what you’re eating.

As a society, we reward the hustle. We look at people who are doing everything, working themselves to the bone, and we’re hungry for that feedback. We want to be liked for the same reasons we see these people getting praised for. But, to get real results, to achieve healthy change, we need to rethink that word.

Hustle is a reference to the frantic action and the results. It doesn’t support what we know to be true about healthy transitions into change. In fact, the glorification of hustle usually pressures us to reject our own needs and race towards burnout as fast as possible.

How can you be internally motivated when the goal is never met, or when the end is never in sight? Running on fear, stress, or discontentment will only work for a short amount of time, and the emptiness that replaces it is incredibly difficult to refill after the damage has been done.

To go deeper into how to be more motivated on the path to mastery, check out my Moxy & Grit Mindset Academy. It’s for newbies and top performers alike to help you get that extra edge.