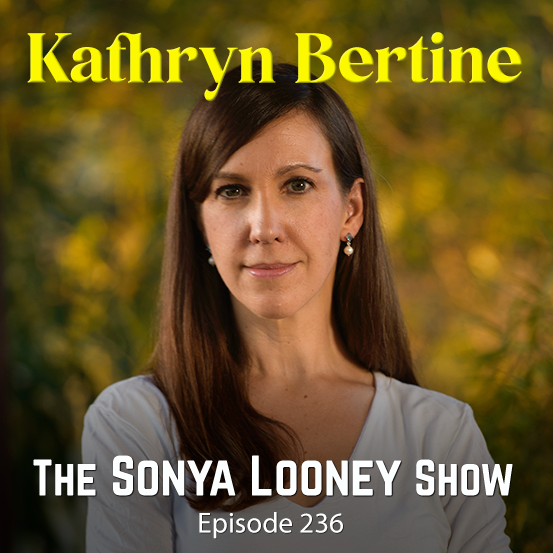 By Sonya LooneyFebruary 26, 2021March 4th, 2021No Comments
Kathryn Bertine is a retired professional female cyclist, an activist for equity in women’s pro cycling, author, and documentary filmmaker.  You might have heard of the film,  Half the Road, which chronicles the inequality in women’s cycling that also is a metaphor for life. With Half the Road, Kathryn noticed that the women’s road races were often shorter than the men’s events, prize money was pitifully lower, and in some cases, non-existent, the female pros had no base salary nor any sort of union to protect their best interests, and the governing body of the sport treated the female racers like second-class citizens. Kathryn couldn’t help but wonder why this was so, and her voice as an activist got louder.  Things have improved since Half the Road came out in 2014, but we still have a long way to go. The powers that be continued to reject and shun her when her “why” got deafening loud, and she started asking big questions, but it didn’t stop her from becoming a pro cyclist at the age of 37.  She raced five years on the pro circuit with four UCI domestic and World Tour teams Colavita, Wiggle-Honda, BMW, and Cylance Pro Cycling. She retired from racing in 2017 but remains active in advancing equity for women’s pro cycling. Kathryn also started the social activism movement Le Tour Entier to bring parity to women’s professional road cycling, starting with the Tour de France. She and her team succeeded, and the women’s field was included in 2014 with the addition of La Course by Tour de France. She is the author of 4 books, with her newest book, Stand, just hitting book stores.  Stand is Kathryn Bertine’s memoir on activism, a manual for progress, and what really happened behind closed doors in her life while making big changes.  Change and social activism don’t come easy.  With unabashed honesty, humor, and authenticity, Kathryn lets you in behind the scenes as she wrestled with the question, “Is the journey worth the struggle?” As you can see, Kathryn has made huge waves for women’s professional cycling, and she’s not done yet.

“Change is possible. Activism isn’t relegated to the wealthy, the famous, the politicians, the influencers. We “regular people” have the power to make change happen, too.” – Kathryn Bertine

“You can’t just run into the battlefield of change and change the world without your own personal world changing as well.” – Kathryn Bertine

“I think it’s really important that people know that within us can coexist sensitivity and insecurities, but also strength and power. And I do have some self-belief that – yeah, you know what, we are all capable of creating change. I think each and every one of us has the ability to rally the troops to call out change and make things happen, and I’m proof of that. I’m not famous, I’m not wealthy, I’m not a politician or a celebrity Instagrammer. But if I was able to affect change at the Tour de France, then anybody can create change and make something happen.” – Kathryn Bertine

InsideTracker: Take a Selfie from the Inside

Get 25% off all tests with this link!