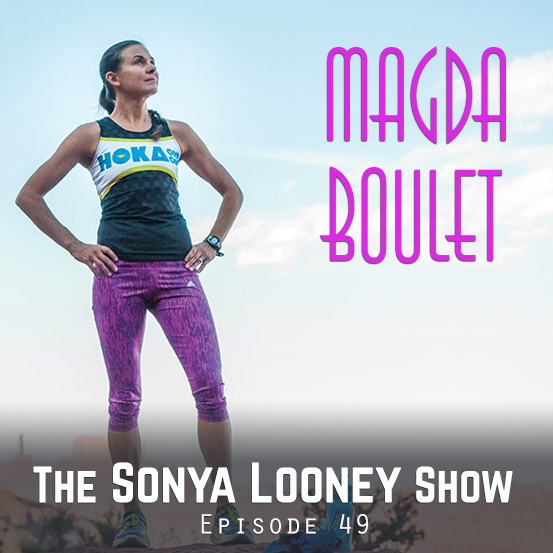 Thriving after a DNF in the ’08 Olympics with Magda Boulet

By Sonya LooneyApril 26, 2018No Comments

How do you engage in the perception of what you believe is possible?  Magda Boulet continually raises the bar.  Born and raised in Communist Poland, she moved to German and later to the United States as a teenager.  With a love for swimming, she wanted to be more social and found running high school. Eventually, she had the dream of one day going for the Olympics for the United States.  After one failed attempt at Olympic Trials in 2004, she continued pushing for her dream.  In 2008, Magda finished 2nd in the Olympic Marathon Trials and was awarded a spot on the USA Team and headed to Beijing.  The unthinkable happened – a freak accident, causing an injury that resulted in Magda having to drop out partway through the Olympic Marathon Event.  Completely devastated, Magda went home and sought solace in nature with her family and had a decision to make: let this catastrophic event define her and give up, or figure out how to overcome it.  And overcome it she did.  Magda tells us about how she became an even faster runner post-Beijing and even found Ultra-Running.  In 2015, she won her debut at the Western States 100 and was named Ultra-Runner of the year.  Since then, she’s placed top 5 at the Ultra-Trail du Mont Blanc and taken on more extreme events.  She is just completing the Marathon des Sable – arguably the hardest running stage race in the world.

I love this episode because Magda relays all of the valuable lessons she has experienced through her dedication to the sport, dealing with major setbacks, her love for challenges, how to view competition and how to get the best out of yourself.  As the VP of Innovation and R&D for GU Energy, we also talk about sports nutrition, the illusion of balance, and how she manages being a professional ultra endurance runner, a mom to her 12 year old son, and a full time career at GU.  I hope you enjoy this exchange with Magda.  The conversation left me feeling inspired and excited and I hope you feel the same way!

Friend of the Podcast: Küat Racks