The last 2 weeks have been all about prep. Tomorrow is the Bailey Hundo – an inaugural event with proceeds going to further develop singletrack around Bailey and also helping kids get involved with mountain biking. I never even knew mountain biking was a sport until I was about 19-20! It’s the first hundred of the year for me, so I’m looking forward to it! Word on the street is that it’s 100 miles(although the image below shows 110? hmmm, maybe it’s 110?) and about 15,000′ of elevation gain – pretty standard for a 100 miler although I think there is quite a bit of dirt road. I didn’t pre-ride the course, so I don’t know much about it other than I opted for my light hardtail (it was a massive debate in my head all week – HT or FS?) and that I’m going to have a blast!

Here is the course profile:

It rained for 4 days straight last weekend, starting with my last blog post. I got out the road bike and the fenders. It wasn’t so bad… better than the crazy 4-5 hour freezing, wet rides I did in the winter! 🙂 47F and rain? No problemo. The main problem I had over the weekend was the same sick feeling I had the Teva XC came back on Sunday. I only rode for 45 minutes and felt dizzy, nauseated, and weak. I suspected maybe my iron was low, so I got back on iron supplementation and started to feel much better. It could have been I was still fighting some flu bug everyone had. Who knows? All I know is I’m happy it’s gone!

Avery Brewing changed their labels, and myself and a couple other dirty mountain bikers did a photoshoot for their new IPA on Tuesday. It’ll be in liquor stores and stuff. The plus is I got paid in Avery beer. 🙂 Here is a shot of the new IPA label (although they redid all the labels)

Wednesday was SHORT TRACK! The last short track I raced a couple weeks back, I had barely stepped off the plane from being in Germany for a week with not a lot of riding, and I felt like hell! Wednesday was another story. I was amped and my legs were giddy. I started in true Looney fashion – raging like a bull to get the hole shot. Nicole and I put a pretty large gap on the field.

Trying to hold the lead for as long as I can

I don’t train my anaerobic fitness anymore (except when I do short track), so I started running out of gas and Nicole overtook me to lead the race about ten minutes in.

I got caught by Erin after washing out in a corner and rode the last ten minutes solidly in third place. The key was I had fun AND got a killer workout!

Thursday, I made it up to Ned. It definitely rained a lot up there – the trails were a little washed out. 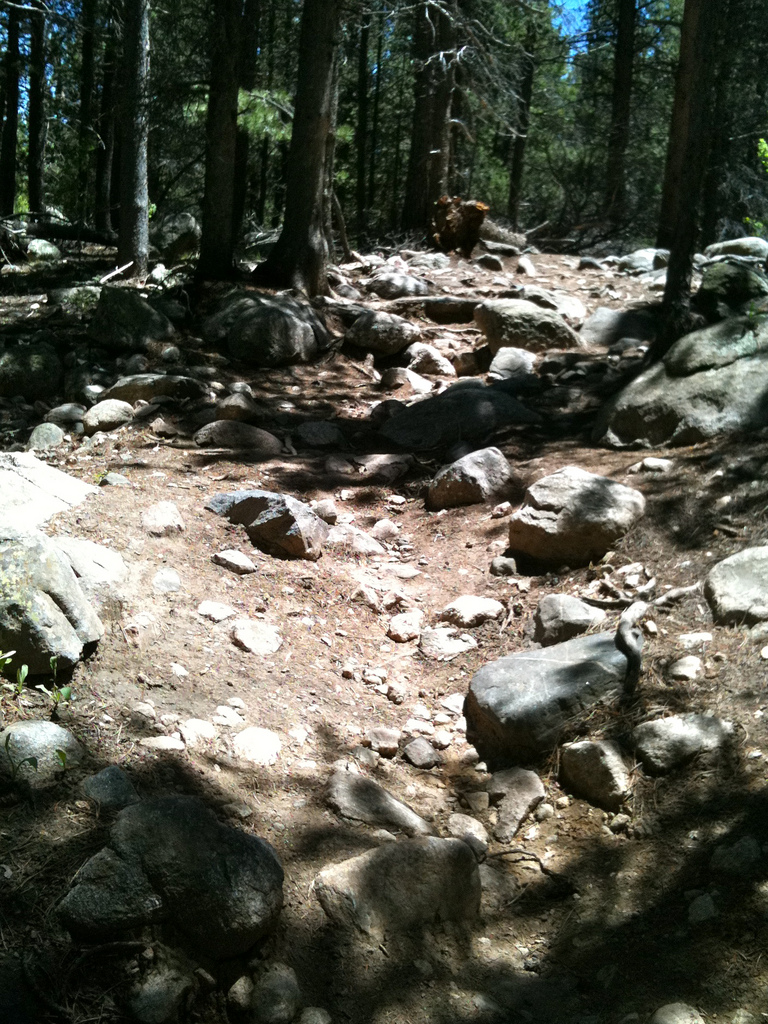 The tough thing about race week is I don’t want to keep my rides short! I want to ride all day, but that’s not allowed!

I’m going to camp in Bailey tonight so I don’t have to wake up quite as early to make the drive, but 4:30 AM is still going to be cold, dark, and painful in the AM. I think that waking up super early at endurance races is actually harder than the race. 😉 I’d like to turn sub ten hours tomorrow, but I have no idea what to expect. The hundreds I’ve done are usually between 10-11 hours, but there is more singletrack and they’re at high altitude.